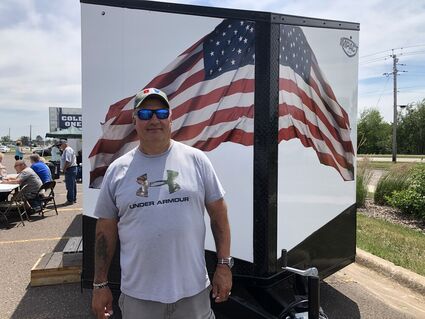 Carlton County veterans knew, but now the entire state is aware of what a special Disabled American Veterans commander we have after Stan Heuer was named "Minnesota Commander of the year" by the state DAV.

Heuer said the members of Carlton County's DAV Chapter 18 nominated him, sending in a written story to the state commanders and Heuer was selected.

"I had a feeling they were up to something because they were sort of hinting around," he said.

The award ceremony during the DAV state convention in May didn't go too smoothly, because the organizers initially called the wrong name. But it all ended well.

"They called out the guy who wrote it, and he looked at me and said 'that's wrong.' Then he went up to them and told them 'it's not for me, it's for Stan.' So they called me up."

Heuer said he was really grateful to be nominated, and thankful for the support of everyone in the local DAV Chapter 18, which now numbers more than 700 members, with auxiliary members in addition to that.

Comments on the local DAV Facebook page offered congratulations, with many writing about how hard Heuer works, and his integrity.

"It's an honor for me to be able to accept it on their behalf, really, because they're the ones that appreciate what I do for them," Heuer told the Pine Knot earlier this month, while he was volunteering at the brat wagon.

At the end of the day, however, he said it's about the veterans they help with money from various fundraising endeavors, including the green donation boxes, twice annual rummage sales, 4-wheeler runs, golf outings and running the brat wagon every holiday weekend in the Premiere Theatres parking lot. They also hold benefits for individual veterans sometimes.

Helping out is what drives him, said the Desert Storm veteran.

"That's what fills my soul, being able to take care of veterans that need help, like I did. It's an awesome thing to have that feeling of helping someone get back to being a normal person again, instead of being down and out or whatever they're suffering from."