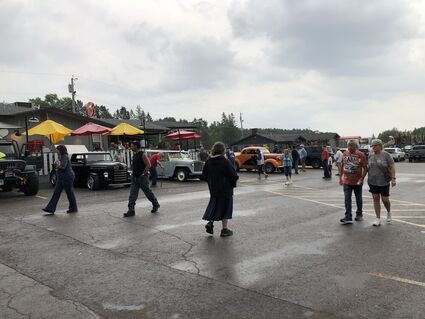 Hot-rodders and other car enthusiasts had a good run last week, with two car shows in two days within a 15-minute drive of Cloquet.

First up was the Smalley-Moen Memorial car show at Buffalo House on Wednesday. Cars were parked on the softball field and around the expansive grounds of the popular destination restaurant and activity center.

On Thursday, Gordy's Hi-Hat held its Curbside Classic despite foreboding clouds and eventually rain. The weather didn't seem to bother most of the car owners or those - like Dan and Alic Anderson, with their State Farm umbrellas - strolling around the restaurant's parking lots admiring the craft and preservation of cars gone by. 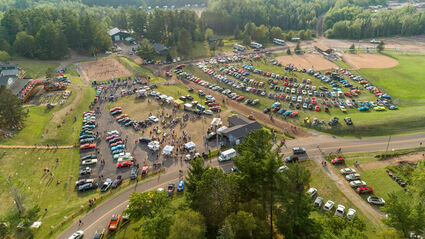 John Zack drove his yellow 1957 Chevy to Gordy's. Dressed appropriately in a grey T-shirt that read, "I can't. I have plans in the garage," Zack was walking through the rows of cars, writing down his favorites.

Gordy's owner Dan Lundquist said they present five "best of show" trophies each year, which go to the most popular as determined by customer and car show participant votes. The Shirley's Choice award honors the wife of Mike Tillman, the founder of many Northland car shows. Roger Maki chose the vehicle for the Mayor's Choice award. The final trophy is Gordy's Choice. "This was the first year that Sever and I selected that one," Lundquist said, in reference to his father's passing in early July. Look in next week's Pine Knot News for the Curbside Classic winners and find more photos at pineknotnews.com.