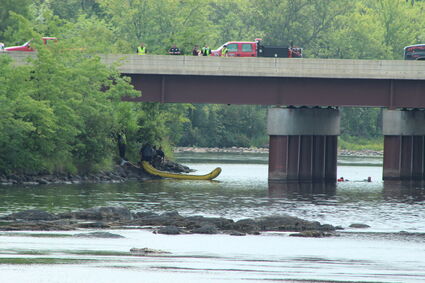 Two people are dead after a vehicle went off an Interstate 35 bridge near Scanlon and ended up in the St. Louis River.

The crash happened at 12:03 p.m. Tuesday, Aug. 10. According to the Minnesota State Patrol, the car was traveling southbound on I-35 when it left the highway near milepost 239 and "submerged into the St. Louis River." First responders donned water rescue gear to reach the vehicle, a 2004 Ford Explorer, which was mostly submerged but partly visible in the water underneath the bridge.

Driver Steven Henry Kimber, 80, and passenger Barbara Jean Kimber, 78, of Carlton both died in the crash. According to the MSP incident report, no other vehicles were involved in the crash and alcohol was not a factor.

Rescue personnel from both the Cloquet Area Fire District and the St. Louis County Rescue Squad responded to the accident, along with the Carlton County Sheriff's Office and MSP. Because it is an active investigation, MSP public information officer Gordon Shank said there was no further information available regarding the cause of the crash in response to the Pine Knot News on Wednesday. Traffic was delayed for hours on the interstate between Esko and Cloquet Tuesday afternoon as the rescue and then cleanup operations were carried out.

Rescue personnel and the CAFD "banana boat" were visible under the I-35 bridge following the crash Tuesday.

The bright yellow rapid deployment craft can be used in water or on ice. CAFD chief Matt Ashmore said two open areas at the front and back of the very stable inflatable boat allow rescuers to use the boat in standing or moving water. The boat is carried in the rescue vehicle, and it can be inflated quickly with bottled air, which helps them get to people quickly when needed.

"We can paddle up over the top of someone and pull them onto the landing section," he said. "When you're in a rapids, the water flows through that section and helps keep you from capsizing. It's one of our most versatile weapons for water and ice rescue."

Of course, there are relatively few water rescues in Carlton County. CAFD partners with numerous local agencies when there is an emergency in the water, because such incidents are very labor intensive.

"We can pretty much handle anything initially," Ashmore said. "The district is trained, we have the equipment and we are prepared. But if things get too complicated or labor intensive, we may have to rely on other resources to help out."

One such resource is the St. Louis County Rescue Squad.

Members of the all-volunteer squad brought its miniature underwater submarine, which can be operated from the shore and sends back video from underwater to a computer on the shore. "It's very similar to what a drone would do, but under water," said St. Louis County undersheriff Jason Lukovsky, describing the device as about 18 inches long by 8 inches wide with turbo propellers on the back.

He said the rescue squad is well known for its underwater work. They also assisted Aitkin public safety personnel earlier this week in finding a drowning victim.