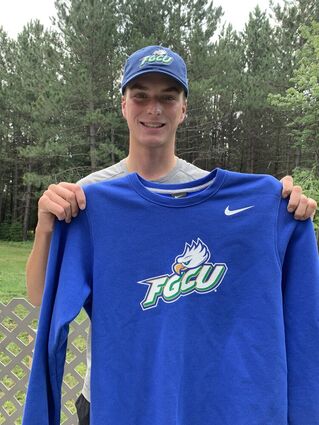 Cloquet golf star Sam Baker has committed to Florida Gulf Coast University, a Division I school located in southwest Florida near Fort Myers that competes in the ASUN Conference.

The 2021 Cloquet grad said he visited the area in 2019. More recently, he took a virtual tour of the school after it made him an offer he couldn't pass up.

But he isn't packing his bags just yet. Baker is taking a gap year, and plans to visit the school in October.

"It's really cool from all the pictures I've seen," he said. "And there are three Minnesota boys down there right now. That connection made it even better."

It's a relatively new school, the 10th state university in the state of Florida, built in the later 1990s. Baker said he's deciding between a business major or studying PGA management at FGCU, which would prepare him for pro golf and running a golf course. It's one of only 15 schools to offer that major.

The Minnesota Class AA state champion said he's taken some time off since the U.S. Junior Amateur Championship. "I haven't touched a club for a while," he told the Pine Knot last week. "I needed a break, so I've been spending time on the lake fishing and having fun."

Not for long, though. Baker is headed to another golf tournament on Aug. 16-17.