Building that survived fires of 1918 is no more 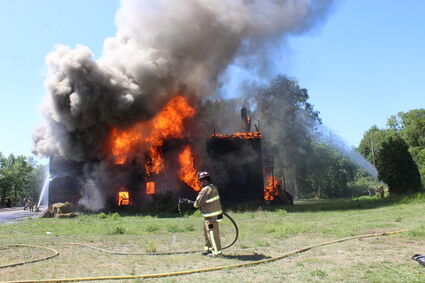 The old building at 219 St. Louis Avenue burned with a fury once firefighters finished their final practice sessions Saturday morning.

The old building at 219 St. Louis Avenue burned with a fury once firefighters finished their final practice sessions Saturday morning, torching one of the few remaining structures on Cloquet's Dunlap Island.

From 8 a.m. to nearly noon, they lit fires and practiced putting them out in the many rooms of the apartment building, until the roof started to sag and it wasn't safe to be inside anymore.

"I think we got 18 cycles in before the building got too unstable," said Cloquet Area Fire District battalion chief Jesse Buhs as he watched the old wooden apartment building burn Saturday afternoon.

Buhs wasn't the only one watching. In addition to the many firefighters there training, pockets of people gathered and gawked at the flames and tower of smoke, cell phones out to snap pictures, some of them along the railroad tracks out front, others observing from the back of the NorthEastern Hotel & Saloon, a block away, drinks in hand.

The building burned vigorously, with the huge chimney stack even collapsing into the heap of ashes. Only its history lives on now.

The stories those walls could tell

Even before it burned in the training fire Saturday, Aug. 14, the nondescript wooden two-story apartment building on Cloquet's Dunlap Island didn't proclaim its status as one of the city's oldest buildings, with 130 years' worth of stories to tell.

NorthEastern owner and Dunlap Island's unofficial historian, Bert Whittington, said the building at 219 St. Louis Avenue was once the old Moose Saloon, the site of the first murder in Cloquet, circa 1907.

"The story goes that there were two guys arguing over a girl, and the bigger guy threw the other guy out of the bar," Whittington said. "So he goes over to Avenue C, probably the Wright Hotel, got a gun and came back. He came in the door on the east side and shot at the guy at the bar, but missed him and killed the bartender."

Dunlap Island was a much livelier place in the early 1900s.

"Back in those days, there were all kind of like bars, brothels, rooming houses with food," Whittington said, confirming that Dunlap Island was the only place people could drink in the early years of Cloquet, and boasted 17 bars, brothels and saloons at its peak (and before Prohibition forced things underground).

One of those was the former apartment building that burned Saturday. It survived the 1918 fires, as Helen (Matteen) Olson recalled in a 2010 interview with this reporter. She lived there with her mother, father and two little sisters at the time.

Olson told how she and her mother were looking over toward what is now USG when they saw three hoops of fire come over the hill.

"[The hoops of fire] came quickly and looked just terrible," Olson said. "The first one fell on the ground, the second on the railroad tracks and the third one headed for the train. I was thinking 'Oh dear God, don't let them burn.' Just as it got there, the fire turned and went up the hill by the old water tower."

They could hear the horses screaming in two big barns across the river channel "on the Cloquet side," Olson said. Her father went across and set them free, going back inside eight times to rescue a billy goat that kept going back into the barn. The horses ran across the bridge to Sunnyside.

The three girls also crossed the bridge to Sunnyside, while both parents stayed to fight the fire. Olson said she and her sisters watched all night from the front lawn of a big yellow house across the river. They saw flames more than smoke as they watched the city burn. It was noisy, she said, as the church bells rang and train and factory whistles blew to warn people to leave and head to safety.

Dunlap Island was largely spared in the 1918 fire; only the railroad roundhouse burned. The next morning their mom came and they headed back home, to find their dad and a neighbor, almost unrecognizable because they were black from the smoke.

Olson wouldn't live on Dunlap Island much longer: within days her mother caught the Spanish flu and died. With no mother, her father had to send the girls to live with their maternal grandparents outside of Moose Lake.

Four years later they moved back to Dunlap Island and Cloquet. Now age 12, Olson worked at a nearby boarding house for Mrs. Ahlgren, who fed the family their evening meal in return. She learned Finnish there, enjoyed ice cream from the NorthEastern and ate pickles out of a barrel at the co-op store.

Fast forward 80-some years, and a different time in the history of 219 St. Louis Avenue. Lon Thill rented the top-floor apartment, overlooking the river. "I moved back here from the Twin Cities and needed an apartment," he said. "Mike Randall and his brother owned it then and they had done some renovating. It was a cute little apartment."

Thill was there Saturday, watching the building burn. He was intrigued by the story of Helen Olson (who died shortly after the 2010 interview) explaining that his grandparents also lived through the 1918 fires in Cloquet. Maybe his grandfather knew her; they were about the same age. "Our family has lived here forever," he added.

According to the "Stories of a Century" book on Cloquet's history, former owner Glenn Stone said the apartment building was actually constructed in 1890, as a hotel and tavern. It survived the 1918 fires, but 20 or 30 years later was set on fire two different times by the same girl, who didn't like living there, or so the story goes. Stone bought the building to use as a warehouse and then decided to remodel it as an apartment building.

The old wooden building remained an apartment building - but declined in recent years - until early this summer when the last tenant moved out. 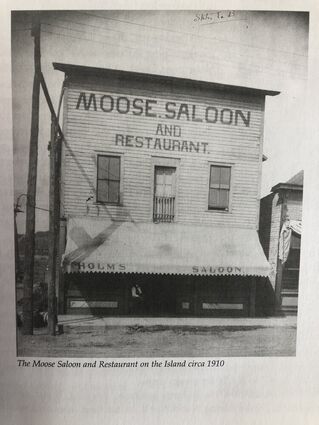 The old apartment building at 219 St. Louis Avenue was originally the old Moose Saloon, the site of the first murder in Cloquet, circa 1907.

That's when Whittington purchased the building. He spent long hours gutting it and eventually offered it to the fire district for training. He has plans for the property, but he's not ready to share those yet.

A history buff himself, Whittington's bar is full of artifacts from days gone by. He and his wife, Judy, have restored the NorthEastern both upstairs (where hotel rooms harken back to the early 1900s) and downstairs since purchasing it in 2000.

Whittington said he went through the apartment building carefully after he bought it.

"The Moose Saloon obviously was part of a lot of history, but nothing was the same. It burned and was remodeled so many times. There were no signs, no memorabilia, no old windows or doors, nothing that was the Moose Saloon. It would never have made the National Historic Register [like the NorthEastern]," Whittington said. "I'm all about saving history, but that building was like lipstick on a pig. Nothing was the same."