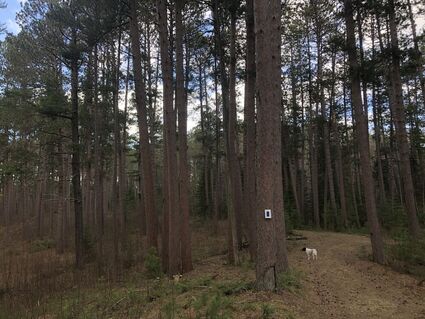 Massive pine trees cover 44 acres of Cloquet Forestry Center land and are known to staff as "Camp 8." The stand of trees dates back to the 1820s, with a few other "parent trees" mixed in that date back as far as the 1770s.

Traveling back in time really is possible in Carlton County. All you have to do is take a hike.

A walk through the woods below the fire tower at the Cloquet Forestry Center - 3,506 acres 3 miles east of Cloquet in the heart of the Fond du Lac Reservation - reveals a forest of tall, straight and large old pine trees. These towering conifers recall a time before eager lumbermen cut down most of the long-lived trees here to build homes and furniture for consumers worldwide, back when our great-great-grandparents were probably alive.

It's quiet there, with trails covered with pine needles and the occasional bird calls punctuating the silence. Leaves rustle with movements by unseen wildlife. In the fall, the leaves on the smaller trees below the towering pines turn red and orange. With a little imagination, it's easy to picture a past forest fire sweeping through the trees.

These massive pine trees cover 44 acres of the Forestry Center land and are known to staff as "Camp 8." The stand of trees dates back to the 1820s, with a few other "parent trees" mixed in that date back as far as the 1770s, according to Lane Johnson, a forest researcher at the center.

The trees that make up Camp 8 didn't burn in the 1918 fires; that's part of the reason they're so old. There is plenty of evidence, however, of older fires at the base of a lot of the trees, where "cat faces" peek out from behind surrounding wood. A look inside the triangular-shaped depressions at the base of the tree usually reveals burned wood. As the years go by, the tree heals itself, growing fresh wood that every so slowly closes up the "cat face," which gets smaller and smaller as the years go by.

"The more scientifically appropriate term would be fire injury or fire scar, but a lot of people familiar with fire scars know exactly what [cat face] means," said Johnson, adding that the term had its origin in the harvest of turpentine from longleaf pine trees in the southeast.

Johnson said research shows fires were common in the forests around what is now the Cloquet Forestry Center, before it became a university research center in 1909. CFC is now the primary research and demonstration center for the University of Minnesota.

"We have a fire history here that we can pull from the tree ring record that shows fires were widespread and burned through every 10 or 15 years back to the 1700s," Johnson said. "It created a more open woodland condition that didn't necessarily promote heavy white pine and instead favored red and jack pine, which are more fire-dependent. We also had a lot of brush, younger scrubbier forest, that may have been more aspen-dominated but kept young through frequent fire."

In large part, the older Norway pine stands owe their salvation from the lumberjacks to the fact that they were not accessible by water, and because they were located within the Fond du Lac reservation, which was not open to white settlement and industry until 1905.

Johnson explained Camp 8 is a reserve stand, a place that the Forestry Center decided to not harvest back in 1910, to serve as a reference stand.

"The plan is to watch how the forest develops and changes over time, either with some types of management intervention and without," he said.

After the forestry center was established, employees and state forestry staff started putting out fires, not appreciating the vital role that fire often plays in fire-dependent pine forests.

But things are changing. Since 1984, the 44 acres that make up Camp 8 has been divided in half, with the east side having a lot of smaller fire-intolerant trees growing beneath the overstory pine, and the west side where the understory has been thinned and brushed to reduce the density of trees to better reflect what it might look like had fires had continued to burn through every 10 or 15 years.

"The plan in the future is to follow up on that mechanical thinning and brushing with prescribed fire," Johnson said, "so, restoring fire to that site to knock back more of the young hardwood tree species in that understory and promote more fire-loving flora like blueberry, wintergreen, bush honeysuckle, sweet fern."

He compared Camp 8 to a "reference library" or a book within a library.

"If you were to just let ecological processes continue without timber harvest, what would it look like?" he said, adding that fire is a critical part of the ecological process. "We have sites like that in other parts of our forest and also in other parts of the state or the region, like Itasca State Park, portions of the Boundary Waters and Voyageur National Park. They're essentially large forest reserves we can go and use as outdoor laboratories and understand how things have stayed the same and how they have changed, depending on what we are comparing them to."

Want to know more about Camp 8? Go to z.umn.edu/camp8 online. 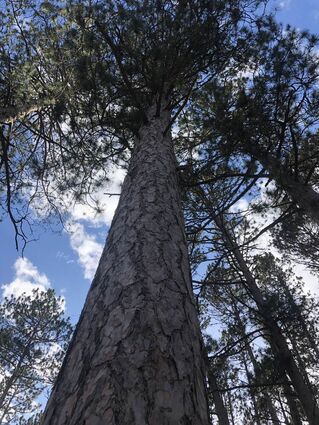 A mixture of pine types can be found in Camp 8. Here is the crown of a red pine.

To get to the old trees in Camp 8, find the large meadow east of University Road, south of the Forestry Center entrance itself. The trail marked with blue squares loops from the southwest end of the meadow east toward the DNR fire tower (which is currently closed) and then circles through the woods back to the northeast end of the meadow. From there you can walk through the arboretum back to the headquarters of the Forestry Center where more walking trails begin. Many Cloquet grads will remember the large meadow from fifth-grade field trips to the Forestry Center.

Can't make it on the 25th? No worries. The self-guided walking tour is available through September. Visitors who make it to eight of 12 tour sites will be eligible for raffle prizes at the end of September. Find a map of the tour at the visitor information kiosk adjacent to the main parking lot or online at Z.UMN.EDU/CFCopenhouse.