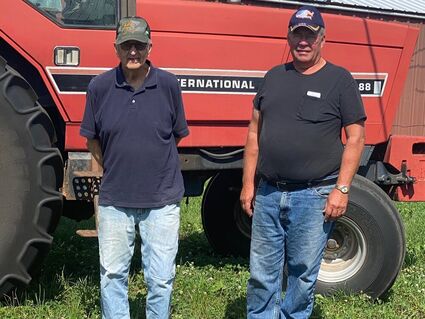 Gerry Konu, left, is in his 80s and still owns the family farm that will eventually be handed down to Mark, who says the 100 years of Konus farming on the land west of Moose Lake will likely end when he leaves the farm. The Konus are the 2021 Carlton County farm family of the year.

It has been 100 years since Finland natives John and Hannah Konu bought and moved to land west of Moose Lake near the Kettle River. Their grandson, Gerry, and great-grandson, Mark, are carrying on the family tradition of farming the land despite the continued decrease of small family farms.

Gerry and Mark Konu will be honored at a reception at the Carlton County Fair on Saturday, where they will be presented with the award of Carlton County 2021 Farm Family of the Year from the University of Minnesota Extension Service. The reception will begin at 2 p.m. in the 4-H building on the fairgrounds in Barnum.

The Konu family added more property in 1953 by buying another farm farther east of the farm's first location. The family still raises crops on the first farm acreage, although the buildings are long gone. You'll still see a large hayfield in the triangle formed by the river and Minnesota highways 27 and 73.

The family moved to the current building site, about a mile to the east, when Gerry was 15 years old. The two farms now total 300 acres.

"My dad, Ted, worked at the Kettle River Feed Store and farmed," Gerry said. "He had dairy cows. We also had a garden. We were pretty self-sufficient. All of the people in the country lived the same way."

Ted and Ina had three children: Gerry, Kenneth and Joanne. They all worked on the farm as they were growing up.

Both Gerry and Joanne left the farm, joined the military and served for a few years. Gerry returned to the farm after his service, milking 25 cows. Joann now lives in Moose Lake.

Kenneth left the farm and went to college. He became a teacher and taught in Stillwater. Mark, his son, loved to come to the farm during the summers and on school breaks.

"His parents would put him on a bus so he could come to the farm," Gerry said.

The fascination held. Mark moved to the farm permanently in 1980. "I've been here 40 years already," Mark said with some amazement.

They continued the dairy farming operation and raised the crops to feed the cattle. Hay and corn were chopped and stored in long white tubes of plastic near the buildings.

The family built a new milking parlor and free-stall barn when Mark came on.

Over the years, the fluctuating prices paid for the milk and scarce helpers took its toll.

"Keeping high school kids at the wages that I could afford to pay them was tough," Mark said. "There was too much competition with jobs in town."

The decision had to be made to sell the cattle and equipment in the spring of 2019. "There were 110 milk cows plus the youngstock," Mark said. "They came and picked them up in semis."

With no cattle, the farm work has changed.

"I am still working just as hard but I don't have to get up at 4:30 in the morning anymore," Mark said. "We only make hay now. That's the easiest and the most valuable. The hay is sold before I bale it." They make hay on the farm and on 15 other farms in the area, about 600 acres total producing as much as 1,500 round bales a year.

Mark also has another job in the spring and fall. "I go down to New Richmond, Wisconsin, and I work for a family across the road from my sister's place. They have cows and raise grain. I do all kinds of jobs there, I'm the do-everything guy."

Working independently is what Mark prefers. "I plan to keep on farming," he said. "I've got to do something. Working a 9-to-5 job would be boring."

Gerry continues to live in the old house on the farm and take part in the farm operations now and then. He never married.

"He does the books," Mark said. "He's also been treasurer for Silver Township since the 1970s."

Mark has been married and has four children, three girls and a boy. He lives in a newer home on the farm.

Extension honored 81 families in Minnesota as Farm Families of the Year. They were recognized at Minnesota Farmfest earlier this month.

There are many hazards when farming, and Mark once taught students in the pharmacy and premedicine programs from the University of Minnesota Duluth about those hazards over the years.

"The instructor used to bring a group of students to the farm the last week of August," Mark said.

"I showed them the dangers of working around the power take-off shaft between the tractor and equipment, grain tank suffocation, and about manure pit and silo gas. That program ended in 2018 when they got a different instructor."

Schoolkids have come to the farm over the years. "I showed them how I milk cows and feed the calves," Mark said. "I also explained to them how the milk is tested for drugs before it is taken from the farm. Milk is one of the most highly regulated food products out there."

to be able to raise a family on a farm with 20 cows. Now farms have 500-1,000 cows. Milk is picked up by the semi load. Beef farmers have second jobs to supplement their farm income."

Gerry still owns the farm and Mark will inherit it after Gerry is gone. Mark is in his 60s and is looking to the future.

"My kids can fight over the farm when I am dead and gone," he said. "The farm probably won't continue. The price of land goes up but people are buying it for homes or a place to put a camper."

Mark is grateful for the role that the farm has played in the family members' lives over the past 100 years. "It's a good place to raise a family," he said. "All of my kids have continued with their farm roots. They raise gardens, apple trees, honeybees and chickens, just like they learned on the farm."