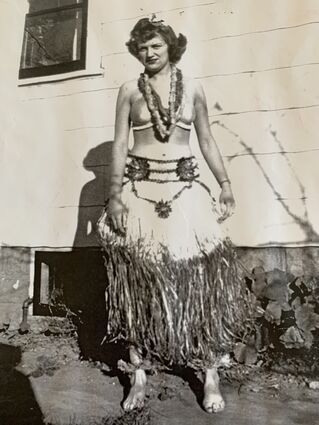 That grass skirt was a hit when Charlotte Polo wore it decades ago and it's still around, says granddaughter Jodi.

It's been 10 years since Charlotte Polo retired from working at Polo Liquors in Scanlon, stepping down after 65 years at the helm of the family business.

That's right. At the age of 90, Polo was still working 14-hour days at least three times a week, running the store, which was touted as one of the oldest single-family-owned liquor stores in the state.

Jodi said the family threw a surprise birthday party the Saturday before her grandmother's actual birthday on Tuesday, Aug. 10.

"I concocted a big fat lie to get her to go, and she didn't kill me," Jodi said with a chuckle, adding that Charlotte is not a fan of folks making a fuss about her. They held the party at the Clearwater Grille (formerly the Lakeview Castle) along the North Shore. "We had the whole place to ourselves." 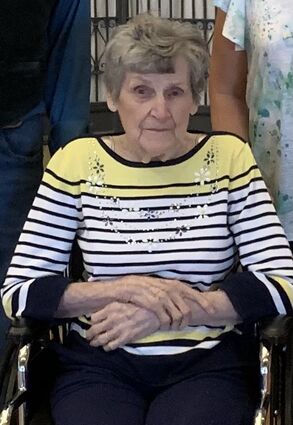 A Cloquet native, Charlotte grew up in the family grocery store business. In a previous newspaper story, the Cloquet native recalled taking her boys to work at the liquor store when they were little; the boys would play out in the yard with dump trucks. Her granddaughter Jodi also spent lots of her growing-up years at the family liquor store. The store was also known for keeping a plastic container of suckers behind the counter to give to children when they came inside with their parents, something they did for generations.

Jodi said Gramma Polo misses all the customers she used to visit with at the store, which she turned over to Jodi and her significant other, Tom Romundstad, 10 years ago. They renamed it "Gramma Polo's Bottle Shop," and updated the store, but eventually sold it to Kwik Trip. "We miss all the people, too," Jodi said. "It turns into your whole life."