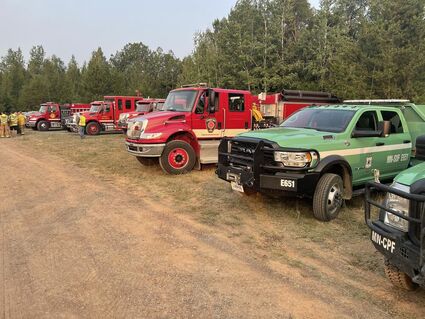 Thomson Township and Cloquet Area Fire District trucks and firefighters join U.S. Forestry Service trucks in a combined response to the growing Greenwood Fire north of Two Harbors. Crews and equipment from the area have been used since the fire was spotted Aug. 15.

The Esko Fire Department has had a busy week fighting the Greenwood Fire, alongside various departments from across northern Minnesota.

After a request for equipment on Aug.16 from the state, the Esko Department has had two to six firefighters and various trucks assisting with fighting the dangerous and growing wildfire that was sparked by lightning and detected on Aug. 15 about 40 miles north of Two Harbors.