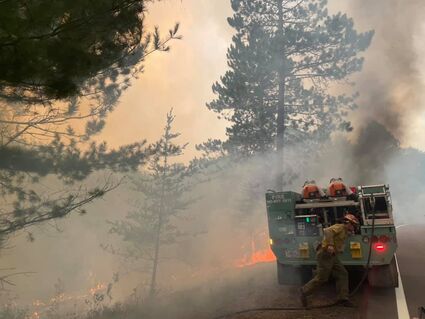 A firefighter works near a fireline at the Greenwood fire north of Two Harbors this past week.

Cloud cover, lower temperatures, and increased relative humidity helped to moderate fire activity and growth of the Greenwood Fire midweek after a hectic Monday that saw the fire make wind-aided runs to the east. A shift of wind from the north brought heavy smoke as far south south as Carlton County Tuesday morning. Superior National Forest officials estimated Wednesday that the fire has torched 21,720 acres, or just more than 30 square miles. The Monday runs doubled the size of the fire.

Forest officials said late on Wednesday that 12 homes or cabins had been destroyed in the fire as it bu...