Korby: Cloquet native has lot to look back on 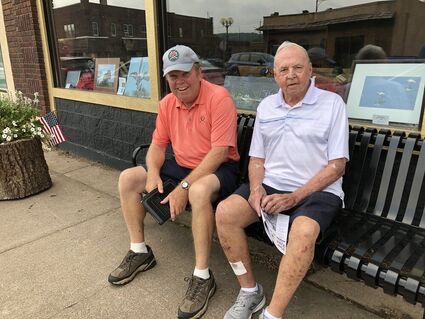 Bob Bromme recently stopped in Cloquet to catch up with friends and to pay a reverent visit to the site where his wife is buried, and where he will be, too. He's 88 now, born in 1933, and lives in Surprise, Arizona. I caught up with him at the Pine Knot office to listen to tales of his storied past. Bob said he couldn't figure out why a columnist might want to interview him; after all, he's "generic." Hardly, Bob.

Bromme's parents moved to Cloquet when he was 5 years old. His dad got a job at the creamery but eventually started a painting contracting business. Things changed, but Cloquet will always be Bob's hometown.

"It was a perfect place to grow up, get a good education, and participate in a variety of sports and other extracurricular activities," Bob said. He went to school at Jefferson on Cloquet Avenue and Eighth Street and sharpened his basketball skills at the Civic Center down the road with the help of coach Clare Hendrickson. He and teammates Gene Hobbs and Dick Almer excelled on the basketball court, football field, and baseball diamond. All three of them were named to the Pine Knot all-century basketball team in the year 2000.

When the new Cloquet basketball coach, Angie Pergol, was hired in 1950, he met with the three captains before the season and said the players could refer to him as "Coach" or "Mr. Pergol," and nothing else. He was a disciplinarian and had high expectations of his captains and players. Pergol ended up in the Minnesota State High School Coaches Association Hall of Fame. They had excellent teams but never got out of the district tournament, losing one year to eventual 1950 state champ Duluth Central. Little Gilbert won the state tournament the next year; Bob said Gilbert had a "powerhouse" lineup and he can still name their starting five.

For seven consecutive summers in high school and college, Bob worked at the Cloquet Country Club on the greens crew. CCC superintendent Carl Peterson was his neighbor and hired Bob. He cut fairways, collars and tees and often watered the greens at night. It was one of his favorite jobs ever. Bromme played fastpitch softball in the summers as well, catching for Diamond Brands in the competitive Cloquet League at Pinehurst Park. He also began leisurely hitting the golf ball.

After a big night of high school basketball for Bob and the Lumberjacks, many players and fans often met at the old Coney Island on Cloquet Avenue. A pretty gal, a year younger than Bob, approached him and said "Bob, that was some great game!" Bob replied, "Are you in the pep club?" This simple interaction led to a lifelong romance. Bromme would eventually marry Carol, and they were together for 64 years until she passed away recently.

His friend Gene Hobbs, with guidance from CHS teacher Bill Johnson, nearly went to Harvard, but ended up at the University of Minnesota. Bob attended UMD and made the basketball team his freshman year. He lived in Cloquet, however, and didn't have a car, and caught rides after practice with Mel Koivisto to Esko. He then hitchhiked to Cloquet. In the middle of winter it got to be too hard (and cold), so he quit basketball and school. He later enrolled at Hibbing Community College and became an all-conference basketball player there.

One summer day when Bromme was working, weeding the sand trap on the No. 9 (now No. 18), he was approached by representatives of the Bemidji State University basketball program. After some discussion, he was given a scholarship to play ball. Bromme was a co-captain and an all-conference player at Bemidji too. Interestingly, he met Ben Trochill and Rol Bromberg on the team; both became lifelong friends and later coaches in Cloquet (basketball and football, respectively). Their girlfriends, eventually their wives, were all good friends too, so it made for a great college experience.

After college, Bromme coached basketball and baseball at New York Mills high school, and then at Itasca College in Coleraine and at Moorhead State University. He had success at all levels, including a conference championship at Itasca with Cloquet grads Jack Hagen and Jerry Maunu. Bob had breakfast with them on his recent visit and caught up on old times.

Bromme spent about 20 years of his working career in the coaching and education field and then about 20 more years as a regional manager for the Pioneer Mutual Life Insurance company. He eventually moved to Arizona, which was part of his region. He was a member of the Moorhead Country Club and the Rio Rancho golf club in Arizona for many years. Bob often came back to Cloquet in the summer to play in the Cloquet Invitational. He'd stay with Bromberg, or the Fond du Lac College when housing was available there.

As proud as Bromme was of his own accomplishments, he truly lit up when talking about his extended family. He has three kids, eight grandkids, five great-grandkids and one in "the oven." He is very proud of them all, and shared sports stories about two of his grandkids. One grandson achieved the title of "Mr. Basketball'' while in high school in Colorado. He then went on to play college basketball for Colorado and was the "sixth man of the year" in the Big 12 conference. The other grandson he spoke of was born without hands or feet, yet has reached the pinnacle of Paralympic Games swimming. He won gold medals in Rio de Janeiro in 2016, London in 2012 and Beijing in 2008, 12 in all. He's a Stanford grad, 31 years old now. Per Bob, with prosthetics "he writes and walks better than you or I."

Although we are separated by more than 20 years in age, we had a blast recalling names and characters of Cloquet's past we're both familiar with, including the likes of Ray Poirier, Kate Vestin, Janet Estlund, Harry and Butch Newby, Andy Coathup, Marvin Gleason, Orin Schuler, Clayton Kermeen, Chic Oist, Snub and Gerry Pollard, Larry Anderson and Herb Drew, to name a few. No Bob, you are not "generic" and you join a list of accomplished Carlton County grads I've had the pleasure to interview.

Steve Korby's interest in writing goes back to when he was in fourth grade and editor of the Scan-Satellite school newspaper in Scanlon. Steve loves sports, especially golf. He welcomes human interest stories about Carlton County residents, projects, history, and plans. Contact him via the Pine Knot at [email protected]