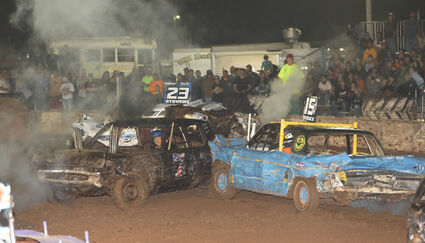 Cars compete in the full-size class at the annual Carlton County Fair demolition derby Saturday night. A record crowd turned out after extra seating was brought in.

After a year's hiatus, the smell of exhaust and the roar of car engines engulfed the fairgrounds in Barnum last weekend. The return of the Carlton County Fair brought the return of the Oval races, the Demolition Derby and the Figure 8.

Not only did the races return, but the fans returned - in record numbers.

"I've never seen crowds like we had, especially for the demolition derby," said Steve Loucks, president of the Carlton County Agriculture Association, which runs the fair. "Our numbers were way up. I think the reason we saw those big numbers was due to the fact that nobody got to do anything for a year."

In the case of Saturday night's demolition derby, Loucks believes a year of pandemic precautions meant drivers had more time to prepare - which meant more cars.

"I really think that during Covid, guys had more time to make new stuff and do more things to their cars," Loucks said. "I think that meant they also could get more cars ready, and we saw the results of that."

Mahtowa's Derek Ament was back for his 21st year in the demolition derby and confirmed that he and his friends work on cars every Friday night all year long. His fiance drives as well. Her car was a lavender '74 Pontiac, while Ament was racing a '79 Chrysler Cordoba.

A past winner of the derby, Ament finished second two years ago but didn't place this year. That's OK.

"To be honest, the best part of the demolition derby for me would be just spending time with good friends building cars, coming up with ideas and innovative ways to make your car a little better than the next guy's," he said, "within the rule set, that is."

Racing is great, though. "The adrenaline rush you get (in the demolition derby) is like no other," Ament said before the race. "I do some circle track racing in Proctor sometimes and that's fun too. But the adrenaline rush in one of these is like nothing you'll ever feel."

What fairgoers saw was a record 82 cars competing in five classes in the demolition derby Saturday evening. A typical year sees an average of 45-50 cars in the derby, so it was an impressive showing. Not only were there more cars, but the crowd numbers were massive.

"We've had big crowds in the past, but this year we brought in two 900-seat grandstands from a guy in western Minnesota, and they were both packed," said Loucks. "We could have filled two more of those along with all the people in the regular spots and in the pits. It was just great to see the turnout."

The turnout was so big they had to quit selling tickets.

Racing began on Thursday with the tractor pull, followed by Friday's oval car races. Friday also saw huge numbers both in the crowd and on the track, with 55 cars racing. Three event feature winners and four powder puff champions were crowned.

On Saturday night, there were five classes run with five winners decided on a perfect northern Minnesota summer evening.

"We had cars from all over the state and northern Wisconsin," Loucks said. "We had a lot of cars from St. Cloud, Pine City, Rush City, Superior, Foxboro just all over the place."

Sunday night the fair wrapped up with another massive crowd greeting 39 racers in the Figure 8 races.

"Our gates on Friday were steady and on Saturday they were busy all day," said fair manager Lindsay Larson. "It showed with our Demolition Derby show in the grandstand Saturday. We had a sold-out show and record car count Saturday evening, and Sunday's Figure 8 races had a great crowd as well, probably the best we've had in many years." 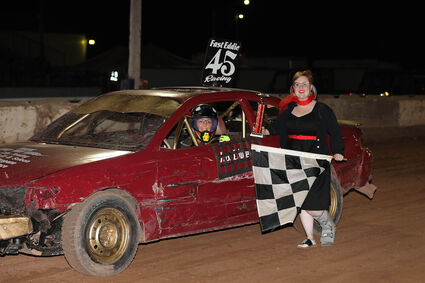