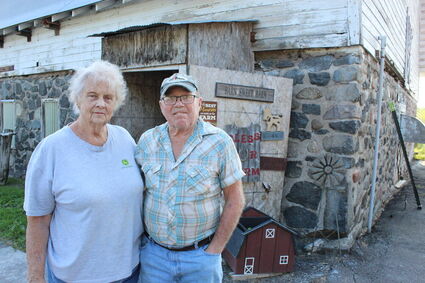 Roy and Rose Aho of rural Cloquet have developed a system to keep the farm viable. Their 10 beef cows have calves each year. Three heifer calves are kept to replace three older cows that are sold. The remainder of the calves are brought to market by a neighbor.

In 1976, Roy and Rose Aho decided to sell their dairy cattle and quit farming. Roy had been hired full-time at the paper mill (now Sappi). With small children to care for, Rose could not manage the milking and chores alone.

"We bought a camping trailer. We took a trip out West to see my sister, went down to Disneyland," Roy said. "We were home for two weeks and said, 'Eh.' We got into beef cows."

"And they've been here ever since," Rose said of the place found north of Cloquet.

According to Roy, his grandparents were on the farm in 1917 and lost everything in the Fires of 1918. They stayed and rebuilt the structures and continued dairy farming. The barn and sauna still stand from that time. "The barn was built in the 1920s," Roy said. The barn is unique in that the walls are built of stone. "There was a neighbor come from Finland who was a rock mason, so he knew how to do the rocks," Roy said.

"The barn has had cows in it ever since it was built," Rose said.

Since the farm has been worked continually by the Aho family for 100 years and met other criteria, it was recognized in 2020 as a Century Farm. This award is presented by the Minnesota State Fair and the Minnesota Farm Bureau to honor family farms. Due to the Covid-19 pandemic and subsequent cancellation of last year's State Fair, the Ahos were unable to be honored at the fair as other recipients have been in the past. They received a certificate and a sign to put at the end of their driveway.

There is a buffet and wall in their dinette area that hold the history of the farm in pictures and stories. Their framed Century Farm Award certificate is displayed in the center. One framed newspaper clipping showcases the Charolais beef cattle that built their herd. Another picture is of a young Rose sitting on her favorite cow at her parents' farm 2 miles away.

Roy is 80, but he is not ready to retire from farming. Neither he nor Rose have missed a haying season "except for the four years Roy was in the service," Rose said.

The drought has cut into the hay crop this year. "We cut twice as many fields and got half as much hay," Roy said.

Rose has documented each year's hay yield in a small notebook for the past 30 years.

"There was one year that we sold hay out west. We had 300 round bales extra," she said. Roy smiled at this and said, "Took the extra money and bought a new haybine."

As in any business, there are challenges on the farm. In addition to the weather, the animals develop health problems, such as a twisted uterus during calving, broken bones or attacks from wolves. Roy himself had a close call a couple of years ago. He hurt himself while cleaning the barn and developed blood clots in his lungs. Their son-in-law and a neighbor helped out until Roy recovered.

Roy and Rose have developed a system to keep the farm viable. Their 10 beef cows have calves each year. Three heifer calves are kept to replace three older cows that are sold. The rest of the calves are brought to market by a neighbor. Rose said they do not butcher their animals themselves.

"When you're out there looking at them everyday, I just can't eat them," Rose said.

Cindy, one of their three daughters, lives with them and explains the record keeping. All the animals are named and notes on each one, such as markings and color, are kept in a large notebook. They all laugh as they list the strategy they have used to devise names for the new calves. They include presidents, states, Disney characters, flowers, herbs and cereals as examples.

"We have a theme every year. This year it's alcoholic beverages. We're kind of running out of topics," Roy said. Inside the barn there are name plates over each stall, but the beef cows come inside only during the colder months. 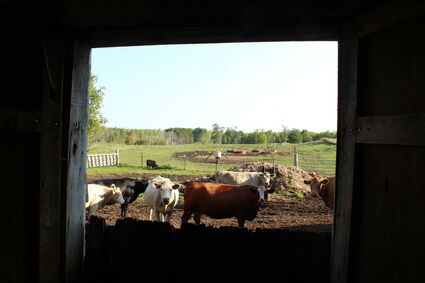 The Ahos switched from dairy to beef cows in 1976. They have a formula to keep the farm viable.

One of the many stories Roy tells is how he feeds the cows and calves a slice of bread almost every day in the barn in the winter. When he calls them in the pasture now, the herd will come running for the bread.

It is evident in speaking with the Ahos how much they love farming and the animals. They tell many stories of special animals that have shared their lives over the years and how they have cared for them. Rose said, "That's what we live with here, is nature."

From abundant flowers gracing the yard to the cats, dogs, goats, rabbits, and cattle lounging in the pasture, this century-old family farm is a true symbol of nature.

This is the last of Francy Chammings' profiles of farm owners in Carlton County. For her other stories, go to PineKnotNews.com. Send ideas for Francy to dwell on at [email protected]