Be bear aware, for their safety and yours 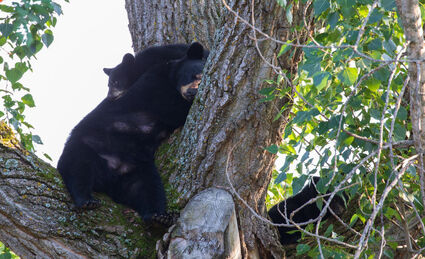 With a late freeze killing some early berries and other food sources diminished because of the drought, there have been a greater number of bear interactions reported across the state. For the past 10 days or so there have been increasing reports in Cloquet and Scanlon of a mama bear and two cubs that are hanging around, eating from bird feeders and generally looking for food.

A doorbell video shows a mama bear walking up the front sidewalk, searching for something, probably food, then walking away.

That she didn't find anything is good, said wildlife biologist Cheron Ferland, who has been following the growing number of "bear sighting" posts on the Cloquet Neighbors Facebook page. The photos usually show a mama bear (that is evidently still nursing) and one or two of her cubs, or simply share the latest. "Mama and cubs were on Selmser last night between 18th and 19th," someone wrote Tuesday morning.

"It seems like people are going out looking for them to find pictures now," Ferland said.

That's not a good idea unless you have a long camera lens, she said, as the interaction may stress the bears and could lead to potentially dangerous interactions, especially because it's a protective mama bear with two cubs.

The main reason a mother bear and her cubs would decide to move to the big city is food, Ferland explained. Not so different from people, but with a potentially much sadder ending. That's because nuisance bears are often killed rather than trapped and relocated, because they've already learned bad habits. So the best thing residents can do to help the bear family is make sure they aren't leaving out food of any sort.

It may seem counterintuitive, but not feeding the bears is the kindest thing a person can do, Ferland said.

"Intentionally feeding bears or allowing them to find anything that smells or tastes like food teaches bears to approach homes and people looking for more," the bearwise.org website states as parts of its mission to help people live responsibly with black bears.

Generally, if a bear is in a neighborhood, it's because they've been attracted to some kind of food source. It's not only garbage. "Bear attractants are things that smell, taste or look like food to bears," the DNR bear page advises. "These include birdseed, dog food, grease on grills, garbage, fish entrails and fruit. Taking the initiative to secure or remove attractants will help prevent bears from becoming a nuisance."

"The thing with bears is that once they get a food reward one time, that's kind of it. They will come back repeatedly looking for food," Ferland said. "Unfortunately, the other thing that's probably happened here is that the young ones learn from the adults, so those cubs probably learned that bad habit, and may carry it forward through the rest of their lives."

The drought is also driving bears to search out new food sources. They are hungry. Winter is coming. According to a Minnesota Department of Natural Resources webpage on living with bears, bears can consume 12,000 to 20,000 calories per day to prepare for hibernation. That's the equivalent of 6-7 pounds of black oil sunflower seed or about 700-800 acorns. 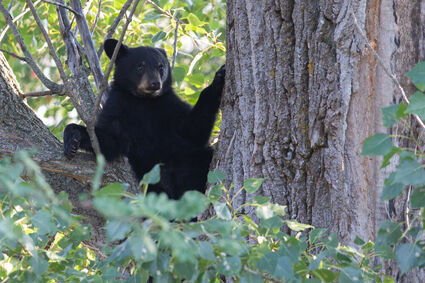 One of two bear cubs that have been making the rounds of Scanlon and nearby Cloquet reclines in a tree on the south side of Doddridge Avenue near 22nd Street last week. The two cubs and their mother have been hanging out locally, according to photographer Mark Cline and daily posts by many others on the Cloquet Neighbors Facebook page.

Again, taking any kind of food source inside is advised. Don't take the garbage out the night before it's supposed to be picked up because a bear can smell something yummy from a long way off.

"It's easy access for them if they can just roll over a trash can and get somebody's leftover fried chicken, they're in heaven," Ferland said. "Once they develop that bad habit, they can become destructive, they'll break into people's cars, garage, even homes. They're generally not a threat, but once they get that food reward and keep coming back, they'll become bolder."

The fact that our rural county and even the city of Cloquet has patches of remnant woodlands makes city living even more attractive to a hungry bear. "They have that refuge, but it also means they can live right amongst us. That's not a bad thing unless they get food rewards and develop bad habits," Ferland said.