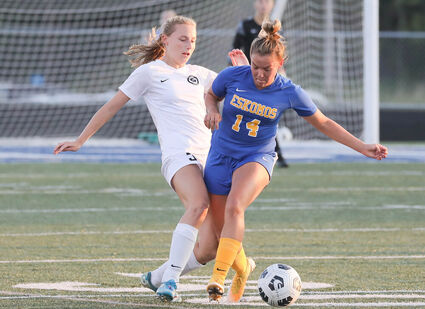 Cloquet's Olivia Jameson moves the ball past Esko's Gwen Lilly during Tuesday night's soccer match at Esko Schools Stadium. Cloquet won the first match of the season between the teams 1-0.

Cloquet and Esko girls soccer fans were treated to a solid early-season game Tuesday night in Esko. In the end, the Lumberjacks won 1-0, but the game was well-played despite being the first game of the season for Esko and the second for the 'Jacks.

"For our first game of the year, I thought things went OK," said Esko head coach Caitlin Lilly. "We have a lot of kinks to work out, but to open against a dangerous offense like Cloquet has can be tough."

Esko goaltender Orie Randall and her defense managed to keep the 'Jacks off the board in the first half despite numerous corner kicks.

"You certainly want to be on your front foot most of the time, but soccer is a goofy game and there are times where you can absorb a lot on defense and then counterattack and score and we needed to be aware of that," said Cloquet coach Dustin Randall. "Esko has some weapons and they are surprisingly quick, which can cause problems if you aren't aware on your back line."

Cloquet's revamped back line played a nearly flawless game against the speedy Eskomos as center backs Olivia Jameson and Sadie Senich continually foiled any chances along with their outside backers Olivia Macaulay and Caley Kruse.

"Our back line has three of four new players back there," Randall said. "I thought they played very well. Jameson and Senich, who are both seniors, are quick, smart and strong, and that is a good combination."

The Lumberjacks started quickly in the second half. First, Katie Turner managed to break free and pump a shot on net, which Esko's Randall stopped for a fine save. Lexa Snesrud had a great chance as she split the defenders, but her shot

missed the net from 20 yards away just a few minutes later.

"Orie played well for us, but as a team we haven't had much time to work on defending those corner kicks, and sooner or later a team like Cloquet will make you pay because they can be very dangerous off set plays," Lilly said.

Cloquet proved that, when they scored eight minutes into the second half on a Turner corner kick from the goalie's right side. Turner's kick sailed out in front of the net and appeared to be headed by Kruse, before senior Jillian McCullough pounced on it and booted the ball toward the right corner. Randall dived and got a piece of the ball, only to have it squib away and squirrel its way just across the goal line for a 1-0 Cloquet lead.

"After losing to St. Francis in our opening game 2-0, it was nice to finally get a goal," said coach Randall. "We had a lot of play in their end of the field, but we need to be more clinical, which should in turn lead to more scary scoring chances."

While they may have lost 1-0, the Eskomo coaches were happy with many aspects of their game and see a lot of areas they can improve on as the season unfolds. 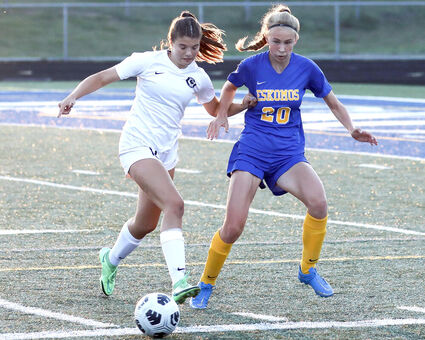 "I thought Katelyn McConnell had a nice game for us and proved to be very coachable," Lilly said. "I also thought both Rachel Antonutti and Tegan Erickson had solid games for us and, of course, Orie is always good in goal for us, so there are some things we can build on."

This year sectional realignments took place, and Section 7 will look markedly different. Cloquet, Hermantown and Denfeld all bump up to Class AA, while Esko will stay in Class A.

For local soccer fans, it appears as if both clubs will be tough to deal with come playoff time, if Tuesday night's game is any indication.