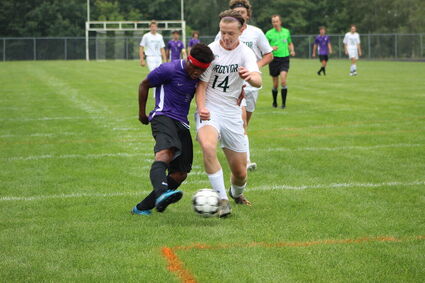 Cloquet sophomore Elijah Aultman bodies his way past a Rails defender during the Lumberjacks' opening game Thursday, Aug. 26 at Bromberg Field in Cloquet. Aultman scored one of his three goals after that play.

After the undefeated CEC boys soccer team was stunned by Denfeld in the second round of the playoffs last season, things got only more complicated. The unexpected departure of head coach Dave Bergan - who took a leave of absence to move to Alaska with his family - left the team "sad but motivated," said senior captain Ryan Tomsche. The tide changed when John Sundquist took the reins of the rebuild. Sundquist, a two-year member of the coaching staff, knew the potential of his new team, despite graduating 11 seniors from last year's regular-season record-setting team.

Sundquist's coaching plan is simple: "Do me and hopefully that's enough."

The transition to head coach was made easier by returning varsity players who Sundquist said "had no problem filling in."

"They were ready to go when it was their turn," he said.

The first step in the 'Jacks redemption story was Thursday, when CEC kicked off the 2021 season with a stunning 6-0 win over Proctor.

Scoring started early, in the third minute, as sophomore Elijah Aultman tapped home the inaugural goal under their new head coach. Aultman went on to score two more goals that game, leaving the pitch with a hattrick.

In the sixth minute, senior captain Ryan Tomsche kissed the ball through opposing defenders and ended the play with the ball in the bottom corner, his teammates celebrating, and his first goal of the season.

Near the end of the first half a Rails defender conceded an own goal off a cross sent by Cloquet sophomore Joe Bailey. In the second half, Joe's older brother, and senior captain, Sam Bailey got himself a goal off an Xavier Anderson cross.

The interim head coach has a lot of confidence in his new CEC squad. "When you've got players like this, it's sometimes 'just roll the ball out and let those kids go'," Sundquist said.

The one-sided season opener provided a preview of the young and energetic 'Jacks team. The "possession style" is similar to what we saw the last two years, but the early introduction of young players was refreshing compared to the veteran lineups of years past. 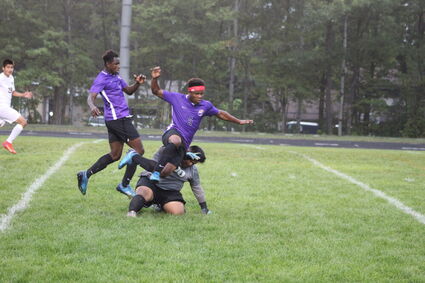 Sundquist's philosophy with new and young players is to "get them minutes early, and minutes when the game matters, not just at the end." He believes it will pay off.

"We get them in there as much as we can early, and maybe we take some lumps and some mistakes, but maybe we're better on the back end come playoff time," he said.

The excitement on the part of the team, coaching staff, and fans is something to keep an eye on this season. They're a young team with people to prove wrong and a state to impress. With redemption on the minds of players both starting anew and those returning, this could be the attitude that was missing previous years. Only time will tell, but CEC is set to be the underdog this season.