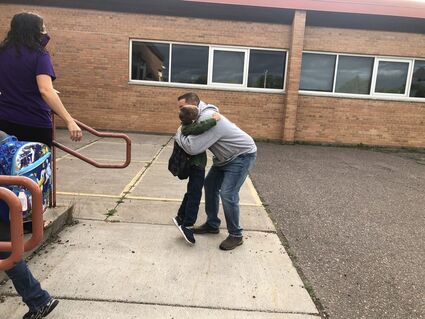 First-grader Finley White comes back for one final hug from his dad, Chris, before heading into Washington Elementary School and his first day of first grade Wednesday. His dad said Finley was excited to be back and not bothered by the idea of wearing a mask, but he and his siblings are always nervous when school starts. Most K- 2 students across Carlton County started school Tuesday and Wednesday this week.

Emotions were high Wednesday at Washington Elementary School as students returned for a new school year. Staff members were joyful, yet took charge tenderly as the younger students alternated between tears, confusion and excitement about the new school year. Bus drivers also had to hold the doors open longer and repeat the stop more than once as children trickled off the yellow buses.

First-grader Finley White walked to school and bravely said goodbye to his dad, Chris White. He took three steps and then turned around for a final hug before heading for Door 3.

"Every year he's nervous; the other two are the same way," Chris said. "It's not a big deal with the masks or anything, but he'll be like this for a week or two, where he sheds a tear or two and then moves on."

The line of cars dropping children off stretched down 13th Street and around the corner onto Doddridge Avenue at 8 a.m. Nick Kotlarz parked and opened the door for his daughter, Elaina, 6, so they could walk together from the car into the school. The first- grader was all smiles and very chatty as they headed into the building.

"She's excited, she's never been to school before; it was all home school last year," said Nick. "No tears today, except maybe her mom." 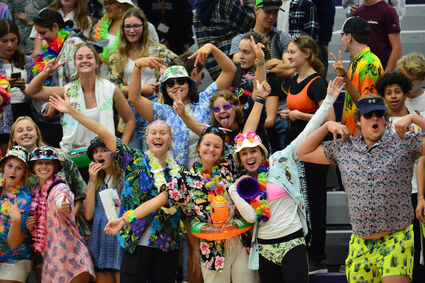 The Cloquet student section cheers for the Lumberjacks volleyball team Tuesday at Cloquet Middle School, in one last maskless hurrah before the district's mask mandate started for indoor activities Wednesday.

Third- grader Harmonique Adophson, 8, was happy as she headed into the school building. Elizabeth Moreland said her fourth- grader, Gavin, was the same way. In the waning days of summer she said he hadn't been too thrilled by the idea of returning to school.

"But this morning he got up and said 'I'm excited,'" she said. "I'm sure he's thrilled to see all his friends again."

A few kids were still trickling through the doorway after the bell rang at 8:15 a.m. Principal Robbi Mondati welcomed the students back on the public address system.

"We're so excited to have you back. We hope you have a wonderful summer," she said, before tackling organizational topics like what day of the school cycle it was, water bottles (encouraged) and the masks (mandatory). She also shared words of wisdom for the day and they ended with the Purple PRIDE Promise: "I promise to be Positive, show Respect, Include others, and Do my best Every day."