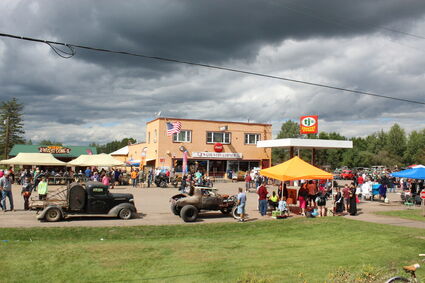 For the 13th year hundreds of people descended upon downtown Mahtowa for the annual Rat Rod Rendezvous, a showcase of rusty but creative classic cars.

For the 13th year in a row, yes, even during last year's pandemic - hundreds of people descended upon downtown Mahtowa for the annual Rat Rod Rendezvous.

It's a car show, but with more rust showing and a lot of creativity. Actually, they say Saturday is for the "shiny cars" - your more traditional street rods - and Sunday is for the rat rods.

What makes a rat rod a rat rod is imagination combined with mechanical know-how, resulting in a sort of mobile collage that comes together to make one vehicle. The more unusual, the better.

"Think 'stupid' and build it," cracked Don Van Guilder of Blackhoof. Van Guilder's 1935 Ford has more wood on and in it than most pioneer kitchens, and it's a very special kind of electrified white pine that Van Guilder does himself in a process that's pretty dangerous, but results in spectacular rootlike patterns. The back windows are wood, the floor inside the car, the steering column, the hub caps and more. His gas and brake pedals are made out of wrenches.

Jim Raiho parked what was a 1957 Chevy Bel Aire next to Van Guilder.

"That car was in the woods. It had trees growing out of it," Raiho said. "I took it out of the woods and that's what we ended up with. It all comes out of your head, the different ideas."

Rats are featured heavily on Raiho's two-door hardtop. One perches over the radiator, with red eyes and an unfriendly grimace. Two more hang out in the back window. A bottle opener is bolted underneath the rumble seat, and the back bumper is a giant black chain. 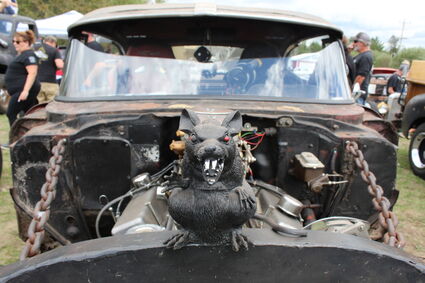 It's all about the Rat Rods every Labor Day in Mahtowa, and Jim Raiho's car is a prime example of that as a rat sits on the front of his hardtop.

Dianne Siegle made the trip to Mahtowa from Rice Lake, Wisconsin. She's a repeat visitor to the Rendezvous. "It's fun. You can touch the cars. It's just a different vibe," she said, comparing the Rat Rod gathering to the more classic old car show.

Van Guilder said he built his car after attending the Rendezvous in Mahtowa with his brother eight years ago.

"We were like, yeah, we could build one of those," he said, explaining that the body for his car was just sitting at his brother's place. "That following Wednesday, we had it on a chassis and we just kept adding to it."

There were plenty of Rat Rods and shinier vintage vehicles on offer Sunday on and around the grounds of TJ's Country Corner, along with live music in the pavilion, food, a swap meet and competitions, including throwing a tire over a street cone, and the first-ever Miss Rockabilly Rukkus Pin-Up contest, in which women were judged on their modeling skills and personality, most of them dressed like 1940s pin- up models.