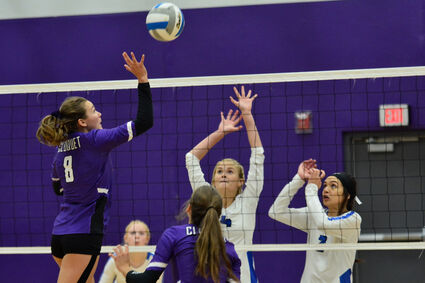 Cloquet's Aili Buytaert (8) goes for a shot over the net as Carlton defenders Madison Asleson (14) and Alexis Thompson (3) are ready for the block Tuesday night in Cloquet.

The Cloquet varsity volleyball team continued on a great start to the 2021 season with a three- set sweep over Carlton Tuesday. The Lumberjacks - who are now 3- 0 on the season - have not lost a set this season. They won 25-12, 25-18 and 25-15 in front of a spirited crowd at the Cloquet Middle School.

The 'Jacks took an early lead and never trailed in the first set of the match. Cloquet used timely placing, finding a weak spot in the Bulldogs defense, and several unforced errors from Carlton saw Cloquet with a 12-6 lead midway through the first set. Carly Johnson then reeled off seven consecutive points serving for Cloquet, which built a lead the Bulldogs could not recover from.

"We had three players missing from the first two matches of the season," Cloquet head coach Heidi Anderson said. "It was nice to have a full roster back, and now we can work on our rotations and keep improving."

Cloquet jumped out fast in the second set of the match, building a 9-1 lead behind the serving of Breea Rasmussen. Carlton responded behind some great serves from both Eliza DeCaingy and Jaycee McMillen to cut the margin to one point at 13-12. Then the 'Jacks again went on a 12- 6 run to close out Carlton and take the second set.

The third set was a close battle in the first part of the set with Carlton leading 7-6 early on. Ava Carlson then took over serving for Cloquet. Carlson's next stretch saw her connect with four ace serves as Cloquet took the advantage 14-6.

Cloquet would continue with timely serving and miscues from the Bulldogs as they finished with a 10- point win in the third set. 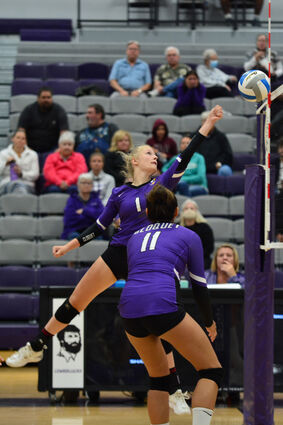 Cloquet's Breea Rasmussen punches the ball over the net Tuesday evening as the Lumberjacks take on the Carlton Bulldogs in Cloquet.

Cloquet will travel to Eveleth on Thursday to face the Golden Bears. Next Tuesday night, they are again on the road to Moose Lake against the Rebels.

Carlton head coach Barb Soukkla said her team has a lot to work on, and a lot of games coming up.

Carlton, who fell to 1-2 on the season, plays at McGregor Thursday. Saturday the Bulldogs travel to North Branch to play in an eight- team round robin tournament.