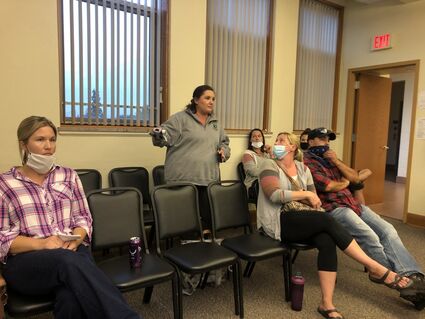 Cloquet parent Jamie Graham tells the school board she'll talk as long as she wants to before asking them to not require masks. "Covid is going to be around for the rest of our lives. Are you going to mask them for the next 18 years?" she said.

The furor over masks continued at the Cloquet school board meeting this week, with five of seven audience members addressing the board about the district's universal mask mandate for all grade levels.

Again, Cloquet parents opposed to masking told board members - with varying degrees of hostility - that their decisions were not based in fact, and that masking children has no direct correlation to the spread of the coronavirus and they should stop.

Meanwhile, up the road in Esko - where masks are required for grades K-6 and optional for grades 7-12 - only one parent spoke up and that was to request the district again post the daily Covid counts. "Knowledge is power," a masked Kristin Parendo told the board. She also gently pointed out that her high-school-aged son said only two people in his classes are wearing masks.

In Cloquet, parent Hillary Hedin told the board their decision "under the guise of protecting them is reprehensible."

"You made the wrong decisions last year for our children and you are making the wrong decision now," she said, accusing the board of choosing distance learning rather than what actually happened: districts had to follow a state mandate. "You will be faced with answering for hurting our children, if not in this life on Earth than in the next. I speak the truth when I tell you that day will come regardless of what you believe."

Cloquet school board members remained united on masks Monday, voting only to change the requirement that athletes playing indoor sports wear masks during games and practices. That will no longer be required, although athletes are required to wear masks on the bench and in the locker rooms when they are not exerting themselves. The rule changes apply to kids who are all old enough to be vaccinated.

In Wrenshall, the school board is still working on its Covid-19 protocols. It voted to not require masks, and members have been debating what the quarantine rules should be for those who are vaccinated and those who are not. Some members have been concerned that unvaccinated people in the school will have their health status known if they are treated differently following an outbreak, either with longer quarantines or required masking.

The debate isn't theoretical in the school. In the first week of classes, three students tested positive for Covid, leaving teachers and students wondering what the exact quarantine rules are. One of those positive students is a member of the football team, meaning the Raptors, made up of students from Carlton and Wrenshall, had to forfeit this Friday's scheduled varsity game. Junior high players were also exposed, superintendent Kim Belcastro said. She was told by activities director Jeremy Zywicki that only half of Raptors players are vaccinated.

The Wrenshall school board on Monday agreed on its current "safe plan" as a working document and board members and district staff will meet next week to finalize details.

Meanwhile, across the country, Covid infection rates are on the rise. According to the CDC's morbidity and mortality weekly report published Sept. 10, weekly Covid-19-associated hospitalization rates among children and adolescents rose nearly fivefold from late June through mid-August 2021, coinciding with increased circulation of the highly transmissible Delta variant. Hospitalization rates were 10 times higher among unvaccinated than among fully vaccinated adolescents.

On Wednesday, the state health department reported that reports of Covid-19 in Minnesota schools are growing rapidly, and state public health officials believe those counts will accelerate in the coming weeks, Minnesota Public Radio News reported.

Minnesota went from receiving reports of about 150 cases a day in schools last week - the first week of school for many districts - to more than 600 on Monday and 500 on Tuesday, Dr. Ruth Lynfield, the state's epidemiologist, told reporters Wednesday.

"This is on the way up," she said. "We do expect it's going to continue to rise over the next few weeks."

While backlogged cases and messy data from the Labor Day weekend make it hard to draw broad conclusions about the pandemic's path, officials remain worried about a potential spike stemming from the new school year, Labor Day gatherings and the Minnesota State Fair.

On a positive note, deaths from Covid remain low for children in the state, with three so far in the infancy-9 years age group.

The CDC has stated repeatedly that preventive measures to reduce transmission are critical: these include vaccination, universal masking in schools, and masking by persons aged 2 or older in other indoor public spaces and child care centers.

So far, so good

Esko superintendent Aaron Fischer said Monday that the first week of school went very well, especially compared to last year when they had their first positive case by 9:30 a.m. on the first day of school.

So far, so good, Fischer said Monday, adding that he was very happy with the compliance of staff and students to the back-to-school plan. "We have nothing confirmed as of 7:10 p.m. today, but of course that can change anytime."

Esko isn't enforcing any mask wearing after hours, and the school district is leaving it up to families to decide if they want to mask when they are watching after-school activities.

"We certainly would still recommend them," Fischer said.

During Monday's work session, Cloquet school board members discussed when they would consider changing the masking mandate in general terms: most agreed it would be eight weeks after a vaccine is approved for children under the age of 12. They stressed that they meet every two weeks and they will continue to look at trends and the latest news.

Superintendent Michael Cary also suggested the board consider comparing transmission rates in Cloquet with those of neighboring districts that aren't requiring masks as the year progresses.

"And if we're not seeing any significant difference in transmission amongst schools based on masking strategy, that could be a trigger to consider shifting away from masking," he said.

He readily admitted, however, the problem with that idea is that other variables, such as vaccination rates, aren't the same across each district.

Other Cloquet School Board actions

• Board members voted 5-1 to approve the previously disputed lease agreement for use of the hockey shelters with the city of Cloquet. Ted Lammi was the only "no" vote, as he has always felt the district pays too much for the hockey lease. Other board members agreed with him, but voted in favor after city officials agreed they would continue to share financial information and look for ways to make the agreements more equitable. "We do get the short end of the stick," said Hawk Huard. The school district will pay $138,808 for 2022; $142,972 for 2023 and $147,261 for 2024.

• Upon the recommendation by superintendent Michael Cary, the board voted to close open enrollment for all grades for this school year. Students who move into the district could still enroll.