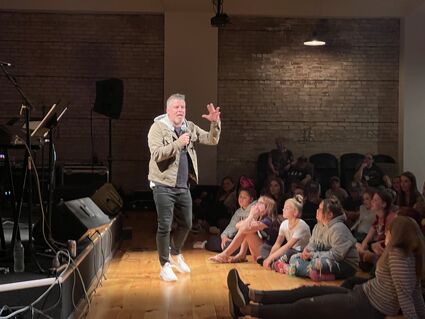 Hermantown Community Church senior pastor Dan Stone Jr. told young people to feel positive about themselves on Sept. 8 at Common Ground in Cloquet for a kickoff to the church year.

Approximately 200 people gathered at the Common Ground building in Cloquet last week to gear up for the fall church season.

Pastor Brandon Monson, youth pastor at Grace Baptist in Cloquet, said 10 youth groups - from Cloquet, Duluth, Meadowlands and Two Harbors - came together on Sept. 8 "as one body" to focus on the next season.

Two professional speakers addressed the crowd of mostly young people and their leaders. Jesse Smith, a former backup dancer for Justin Timberlake and Rihanna and now host of the online competition WorldWide Dance Challenge, performed a dance routine and delivered an encouraging message about believing in yourself, "focusing on what you do have and not what you don't have," Monson said.

"He spoke about not believing negative lies about yourself," Monson said. "All of us wrote down a negative lie or negative self image about ourselves. At the end we went outside and burned them in a big barrel. It was a pretty cool moment." 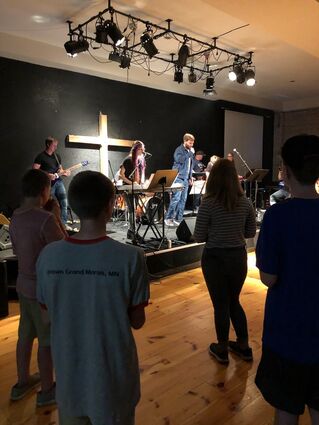 Presence Music, a Christian pop and worship band based in Duluth that includes Monson and Smith, also performed.

The gathering grew from a smaller event last year with just two churches and the local Young Life group. Monson said they got really good feedback from participants and may try to hold a similar event at Common Ground at the end of the school year.

The youth pastor said it was thrilling to see the youth groups together, noting that young people often don't have the same dividing lines as their elders, between each other or between different churches. The message was good, especially considering the world has been dealing with a pandemic for more than a year-and-a-half, he said.

It was a "bright light with all these crazy times," he said. "We can all use a little hope in times like this."