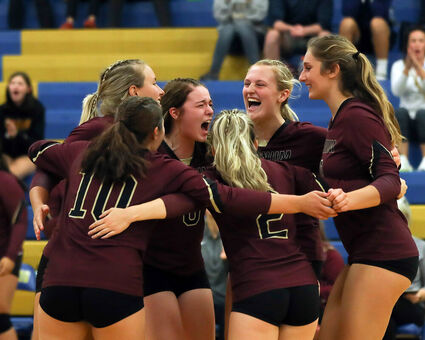 Barnum volleyball players celebrate after winning the second set during Thursday's sweep at Esko Thursday night. The Bombers won the match with scores of 25-22, 25-23, and 25-18. It was the first Barnum win over Esko since 2010.

When the Esko and Barnum volleyball teams met up last week, tradition would have predicted the Eskomos would be walking out of the gym with a win.

"They came in and took it to us," said first-year Esko coach Pete Stasiuk. "Barnum played hard, they dug the ball out on defense and we couldn't stop them. You have to hand it to them: they did a nice job against us."

The Bombers have the steady hand of Corina Newman guiding them as she has for many seasons. They reacted to the opportunity well.

"The girls just played well together and that is the best I've seen them play," Newman said. "They played together, they helped each other out, and they were taking what we were telling them from the bench and using it in the game."

Barnum opened the season on a hot streak at 4-0. Much of that has to do with the fact that they feature an older team, led by setter Brooke Doran, and they have a ton of players who have seen plenty of varsity action.

"Brooke is our rock," Newman said. "She is the quietest person ever, but she hustles after everything and never quits. She's been a starter for four years and our seven seniors have been together since they started, which helps with their confidence."

While the Bombers have an experienced team, the Eskomos are a mixture of older and younger players.

"We're kind of an in-between type of team," Stasiuk said. "We have four seniors, four juniors, a few sophomores and a freshman. Since it is my first year, I am still learning about the kids and what they can do, but we are seeing improvement. Now it is important to get them in the right places." 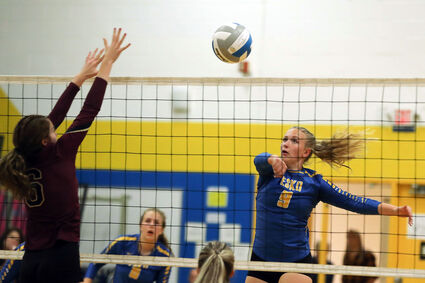 Esko's Kyra Johnson makes a kill away from the defense of Barnum's Lily Higgins during Thursday's match.

Both coaches were excited about the atmosphere that greeted the teams in the Esko gymnasium.

"The crowd was amazing and to have fans there cheering and going crazy was a lot of fun," said Newman.

Stasiuk agreed. "It was a blast to have the noise and the crowd," Stasiuk said. "Our Esko crowd is incredible. They are loud, supportive and we have just a great student section."

Over the weekend the Eskomos hit the road and played in North Branch in a tournament where they went 2-2 and finished fourth.