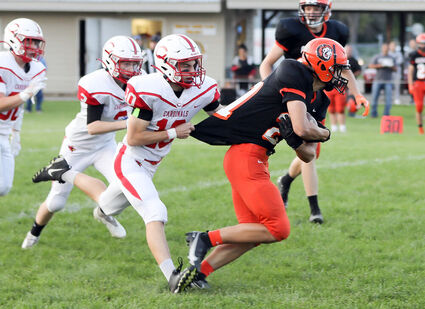 After opening the season with a thrilling come-from-behind, last-minute win, the Cromwell-Wright/Floodwood football team fell on tough times last Friday when it was dismantled 58-0 by Ogilvie.

It was a tough night for a young team.

"Overall numbers are pretty good, much better than the last couple years," said Cardinals coach Jeff Gronner. "We are a very young team and we are counting on many freshmen and sophomores to play this season."

The Cards returned four seniors at the start of the season, and one of them is injured.

"Our returning seniors are four-year starters Zevvus Smith and Ethan Shelton and three-year starters Jacob Anderson and Jay Olesiak," Gronner said. "Unfortunately Ethan has a knee injury and is going to miss most or all of the season."

The Cardinals opened the season against North Central. At the end of the third quarter North Central led it 12-6.

"With about four minutes to go I went for it on fourth down on our own 25 and we did not make it," Gronner said. "They had fourth-and-goal at the one-yard line with two minutes to go and we stopped them."

That's when some amazing fireworks started for the Cards. 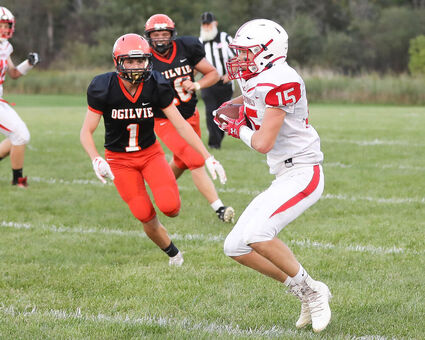 They drove 99 yards in six plays, highlighted by a 60-yard screen pass from Dylan Nyberg to Zevvus Smith on a fourth down. Nyberg scored on the next play on an 18-yard run.

Brady Dahl sealed the game with an interception on North Central's next offensive play.

Coach Gronner has been involved for many years with the Cards, including coaching state championship teams, but that opening win was one he will never forget.

"That was one of the most improbable comeback wins of my career as coach," Gronner said. "It was a very exciting way to start the season."

As much fun as the win was, things came crashing down the next week.

"Ogilvie is very good," Gronner said. "They are bigger, more physical and faster. They totally dominated us and you can't do much against that. We'll just press on and keep getting better."