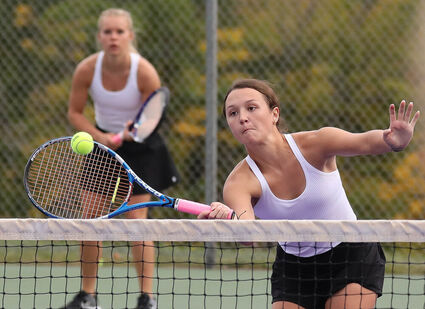 CEC's Brynn Martin wins a volley while doubles teammate Jayden Karppinen stands ready during a match with Superior on Monday. The Lumberjacks won 6-1.

It's been so long since the Cloquet-Esko-Carlton girls tennis team beat Duluth East that nobody can remember when it happened. Last Thursday, the Lumberjacks got an impressive 4-3 win over the Greyhounds at Lakeview Courts in Duluth.

"It's probably been 10 or 15 years since we beat East," said CEC coach Derek Johnson. "We won three out of four singles matches, which was great. Then we won at No. 3 doubles, which got us the win."

CEC started the year off with an impressive tournament win when they knocked off Mora, Aitkin and North Branch for first place.

"We kept telling the girls we have a shot to win that tournament if we came into the season ready to go and not rusty," Johnson said. "Some girls don't pick up a racket all summer and when you do that in girls tennis, you are already behind when the season starts. Our girls took advantage of a nice summer and got out and hit a lot."

On Monday night CEC downed Superior 6-1, and on Tuesday they defeated Denfeld 7-0.

A big key to the 10-3 start this season has been larger than normal turnout for the team which includes 15 seniors. Those kinds of numbers are nearly unheard of for CEC.

"We are at 46 total girls in grades 7-12 which is higher than normal," Johnson said. "That is a great number, but with just four courts to practice on we are running split practices to accommodate everyone."

This season Marina Dostal has played No. 1 singles, Winnie Benjamin-Hall has played No. 2, Lydia Stone has been playing No. 3 and Addie Loeb has been the No. 4 singles player for most matches thus far.

"All of those players are seniors and have been playing well and just taking care of business at their respective positions," Johnson said. "At No. 1 doubles are seniors Brynn Martin and Jayden Karppinen and they have been rock solid this year. They played their best match against Virginia last week."

At No. 2 and No. 3 doubles, the 'Jacks have rotated four different girls with the lone junior being Alexis Goranson in the mix with seniors Bella Harriman, Dana Jones and Carlee Maslowski. 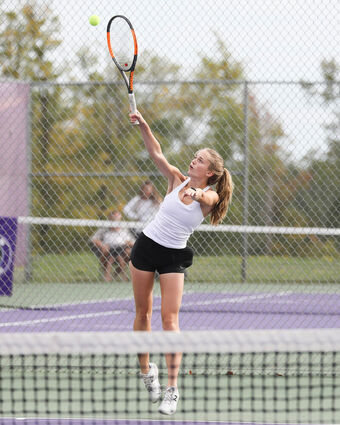 Cloquet's Lydia Stone serves a ball during her match Monday against Superior.

"We don't have any all-stars this year, but all the girls are extremely solid with experience up and down the lineup," Johnson said.

With the solid start to the season, Johnson is excited about the possibilities as the season wears on.

"I am pleasantly surprised at how well we compete, but I wouldn't say I am surprised at the hot start," Johnson said. "I knew coming into the season we had an experienced roster who are very coachable."

Johnson also is excited there will be more normalcy when playoffs approach.

"Last year was an odd year with Covid, so we didn't have a full number of matches and it was a little different playoff system," Johnson said. "We were the consolation champions in the North bracket. This year we have 17 teams in our section with some really, really tough teams at the top, so we will see how we fare down the stretch."