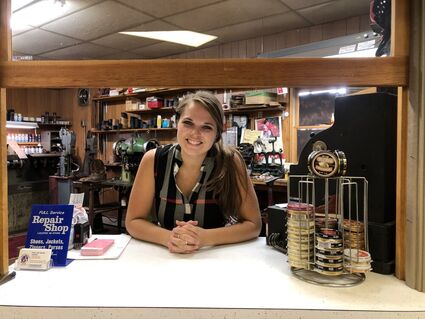 History repeated itself this week at Burger Shoes in Cloquet.

After closing on the sale of the longtime local shoe store Tuesday evening, Carmen LaPlant celebrated her first day as the new owner on Wednesday, exactly 54 years after Ludwig Burger held his grand opening at 1609 Carlton Avenue.

Ludwig's daughter, Maria Leyrer, took down the bell that hung over the front door of the store on Tuesday - as a new family heirloom - and enjoyed her first day of retirement. "It's home," she said. "I grew up here. I was 1 when we moved here."

Leyrer leaves the business on a high note. Last year Burger's had its highest-grossing year ever at $384,000 ... 10 times the amount that Leyrer made the first year after her dad died and she took over the business.

Although Leyrer had worked in the business growing up, she was busy leading her own life when her father passed away, and had to decide quickly what to do about the store. She and her husband didn't pay themselves for at least the first five years as they - with Mike as support but Maria at the helm - built the business back up.

LaPlant is probably a little better prepared than even Ludwig's daughter was. She has been working at Burger Shoes for the past seven years and actively training to take over the business for at least five years.

"We knew we had to make it work so this legacy could go on and support another person," Leyrer said. "She's taking on a big endeavor, but she's young and amazing. It's a win-win, for sure.

Leyrer said it was meant to be, from the moment LaPlant moved into their rental property and Maria saw that her first job growing up in Grand Rapids was at a shoe store. From then on, she kept asking when LaPlant was going to come work with her and eventually - two years later - she said OK.

"Things don't happen like this often," LaPlant said. "I'm very close to my family and this is a family-owned business and I feel like I'm a member of the family. It's a cool thing that's happening here."

LaPlant said it's been an amazing journey with Leyrer.

"We joke that I'm the younger version of her, as far as work ethic and fire and knowledge," she said. "And it's really cool to have this partnership, this mentorship."

The seeds of Burger Shoes were planted in former Yugoslavia - Slovenia, to be exact - where Ludwig Burger learned how to make and repair shoes before moving to the United States to live with an uncle on the Iron Range. "It was the typical two weeks on a boat with a dollar in his pocket story," Leyrer said.

He worked in the mines there for 10 years, then moved to Cloquet and set up a tiny shoe repair shop on 10th Street in 1958. Leyrer said John Buskala walked her to the exact location in what is now a parking lot for Nelson Funeral Home.

He met and fell in love with her mother, then Bernice Ostoff. They opened up their first Burger shoe store at 1609 Carlton Avenue in 1967 - in a former grocery store building - moving into a home. Business was good, and pretty soon they opened a second store, Fashion by Burger's, in downtown Cloquet. Bernice ran that store.

"This store was always the flagship store, and carried work boots, comfort casual, men's, women's and children's shoes," Leyrer said. "The downtown store was fashion, things like go-go boots. I remember my mom waited on Jessica Lange there once. She said she had such colorful clothes."

For a brief period there was a third store in the new Lumberjack mall, called Hex and Castles, but her dad closed it down after six months. The fashion shoe store lasted about 10 years. But the flagship store remained, with Ludwig at its helm.

"He was the shoe repairman, that was his craft and trade," she said. "There were usually a couple part-time employees who sold, and I'd work there every Saturday growing up."

After her teen years, Leyrer left for about five years, and worked at other jobs. Then her dad died in October 1995.

"If it wasn't for my husband, I probably wouldn't have come back because losing my dad was really hard on me," she said. "Going back to your childhood home and taking over the business, it was tough." Slowly but surely, they built the business up to what it is today with the help of a long list of past employees, which she rattles off.

Last week Leyrer was mostly done cleaning out the office, finally taking home the leather vest that had hung there for the past five decades and photos of Burger's relatives in Slovenia.

She plans to go live there for three months, in a house she's rented, and get to know those relatives even better. Mike retired last year and now she's excited to join him.

"I never would have done it differently, but I'm going to retire now and explore life," she said.

LaPlant said she's gone through every emotion over the past few months as they prepared to close on the sale: nervous, scared, super-excited.

"But I also know that I can do this," she said. "I've been doing shoes for 12 years, so I know my stuff. And I pride myself on customer service."

LaPlant started her shoe career at Benders in Grand Rapids, then ended up running the Younkers shoe department when she was a University of Minnesota-Duluth communications and Spanish student.

"For [Younkers] to close and then to go to a small business, when small businesses weren't even supposed to make it, and now to buy one ... I think that's the scariest thing," LaPlant said. "But I grew up in a small town and that's part of the reason I stayed here. I think each community really wants everybody, every local business, to make it, especially now."

She gives Leyrer a lot of credit for building up the business, for working with the local mills to grow their workboot business - employees get vouchers to buy boots - to targeting quality "comfort casual" shoes that customers can wear for years. 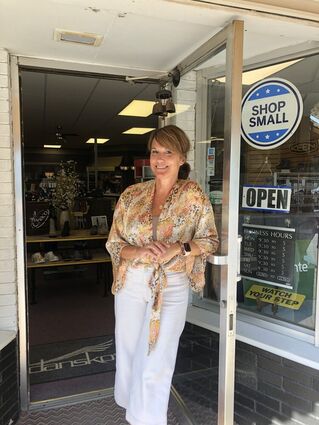 LaPlant knows all the repeat customers, she knows the mill employees, she even knows how to do shoe repairs now. She thanked community members for supporting the hometown business, and she thanked her "bar family" at the Jack - where she also works part-time - for all the support they've given her.

The new owner said she doesn't plan to make any big changes. A couple of updates and a couple of new brands, she said, that's it. She hopes people will stop in and say hello, whether they're current customers or new to Burger's.

"It's going to be the same friendly faces, the same customer service. We're here to keep people's feet comfortable. That's what it's about. This business is established and nothing's broken, so why would I do anything to 'fix it?'" she said.

Look for more historic and transition photos online at PineKnotNews.com