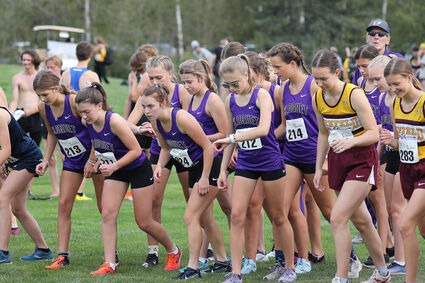 The Cloquet girls cross country team gets ready to start the Dan Conway Classic race at Nemadji Golf Course on Sept. 9. Elise Sertich (212) led the Lumberbacks team with a time of 21:39.8.

On the boys side, the Lumberjacks have relied on Miles Fischer and a host of others to lead the way.

"Miles Fischer has been running especially strong each week, leading the boys team," Allen said. "Sam Buytaert also put in a strong performance at Eveleth this past week."

The boys squad has a ton of depth this season.

"Jake Mertz and Cale Prosen are continuing to improve each week and are reliable for the team," Allen said. "A surprise is ninth-grader Ian Berube. At Eveleth he was our No. 5 runner on the boys team, but with more experience racing the 5K each week, I think that he will continue to be a scoring runner."

When it comes to sectionals, Allen feels the boys could make some noise. "I think that we are in a good position this year," Allen said. "We have a young team with only Miles, Sam, and Cale returning from the varsity squad two years ago. Jake last year improved a lot and ran varsity for us, but this is his first year as a varsity runner in some of our bigger meets." 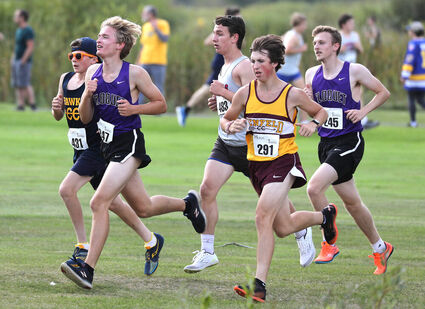 Charlotte Ripp is the only returning varsity runner and "she is leading the team nicely," Allen said. Her daughter, senior Amelia Allen, is out for the season with a tibial stress fracture that she suffered at the meet in Nemadji. "Amelia felt something pop in her shin right before the mile in the race and continued through to the finish," she said.

Despite losing a talented runner, the Cloquet girls have some depth.

"Elise Sertich has also been running strong for our team this year," Allen said. "Two eighth-graders, Bri LaCore and Adrianna Nelson, have each been scoring for us on varsity." Other varsity runners have been 10th-graders Keanna Simmula, Victoria Nelson, Lily Summar and Maddyson Waters. "Each week the girls are running in a tighter pack," Allen said.

"I am really pleased with how they are coming along with their training," said Allen. "Again, they are a really young team, with little varsity experience in our larger meets."