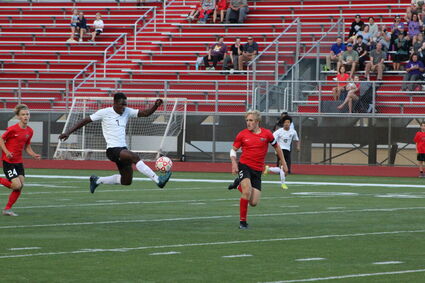 CEC's Jordan Aultman looks to control a ball during CEC's 1-0 loss to East last Thursday, a rain-shortened game that had the Lumberjacks surging before the match was called.

In a stormy bout between the Cloquet-Esko-Carlton and Duluth East boys soccer teams last Thursday, the Lumberjacks were left with a 1-0 loss and an early exit as the weather prevented a full second half.

CEC head coach John Sundquist felt his team got unlucky when it came to which half of the field they defended first.

"That 30 mph wind was like an added player for them," he said.

The game at East started windy, warm and sunny but storm clouds soon crept in. Throughout much of the first half, the two sides showed strong midfield presence but East had the upper hand. The Greyhounds' lone goal came after a rebounded free-kick and a scrum in the box.

The time played in the second half showed what could've been for CEC. Chances and shots began to favor the 'Jacks, but the weather decided the outcome.

Sundquist had no hard feelings. "East played tough and credit to them to put one by Lucas (Rauner). It hasn't happened often this season."

Senior captain Ryan Tomsche said he feels good about the season up to this point and that improvement is constant across the team. When playoffs come he thinks they'll be prepared to win. Regarding the East game, he thought that if they were given the full second half that the outcome would've been in CEC's favor. He felt a shift.

"We were having chance after chance and eventually I do think we would've scored. But there's nothing we can do about it now and we're back to preparing for playoffs," Tomsche said.

Sundquist also said they've already put the game behind them.

"They are a non-section, non-conference opponent," he said. "Would it have been nice to finish that game and win? You bet. Does it effect our overall goals this season? No."

The CEC boys have lost just three games out of the last 10 played. The losses were against Mounds View, Duluth East and Grand Rapids. The wins came against Proctor, Mesabi East, Marshall, Hermantown, Superior and Hibbing/Chisolm. CEC has one tie this season, a scoreless game against Rosemount. The 'Jacks have scored 31 goals while allowing just 6.

Sundquist said his team continues to raise the bar. He has experimented with some position changes, especially with players like Jordan Aultman and Sam Bailey, who add versatility. 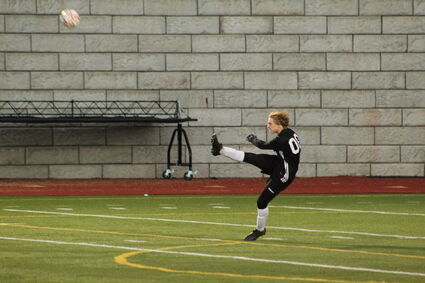 The Lumberjacks mindset has remained the same, he said, and the team is changing. "There are growing pains with every season and it's how you deal with things that makes all the difference," Sundquist said. "We have a lot of 'team first' players and that makes everything easier."

Spencer Teitelbaum, one of three senior captains, believes the strength and chemistry of the team will separate them from their opponents. He said that a lot of the older players have been teammates since elementary school so they know each other and their capabilities.

"Our new teammates this year have filled in some major gaps from our departing seniors from last year," Teitelbaum said. Beyond the chemistry of the older players, he said the role of new players and old will find a way to mesh.