Rodd's Ramblings: Former Lumberjack is looking west for a chance 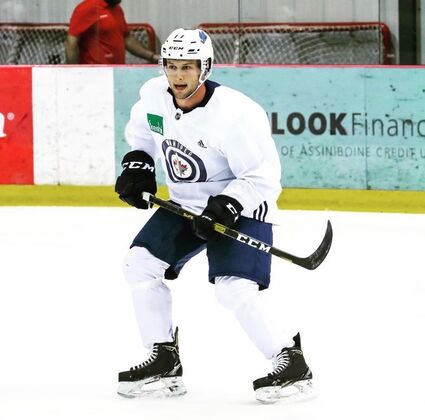 Former Cloquet-Esko-Carlton hockey player Westin Michaud has moved from the Manitoba Moose to an NHL affiliate.

Former Cloquet-Esko-Carlton hockey player Westin Michaud is hoping a move west will give him a chance to realize his dream of playing in the NHL.

After playing professionally for the Manitoba Moose last season, the 2014 Cloquet graduate has signed a contract to play for the Stockton Heat - a minor league affiliate of the NHL's Calgary Flames.

"I think making the move to Stockton will give me more of a chance to showcase what I can do," Michaud said. "I feel very fortunate to get a chance to [do that]."

While Michaud is - and has been - a great player, he has never been known as the go-to during his playing years. He has been a grinder and a guy who puts in extra work and never quits. He is a person you root for, a player who has to work for everything he gets and never quits.

"That's just my nature to work hard and never give up," Michaud said. "You need to persevere. I know I can play in the NHL and I just need the opportunity."

After graduating from Cloquet and playing junior hockey for a year, Michaud went on to star at Colorado College from 2015 to 2019. He was granted an extra year of eligibility in college due to a torn ACL his freshman season. He used that extra season to play for the University of North Dakota in 2019.

One of the unique things about Michaud is his ability to relate to kids. After every warm-up session, he throws a puck to a youngster in the stands. He said it's his way to say "thank you" to kids for coming to the game.

"I started doing that when I was in junior hockey," Michaud said. "I just look at those kids and it reminds me of myself when I was their age. I even did it last year when there were no kids in the stands, just to keep that tradition going."

One of the many ways Michaud gives back to the community is by hosting youth camps through his business called Northland Hockey Development Academy. Michaud said the camps will continue next summer and fall after his return from his professional season in California.

He is a year away from a degree in educational leadership. His Northland Hockey Academy is an extension of his career, academics and life goals.

"It is just great to see kids have fun and be a part of something," Michaud said. "I enjoy putting on the camps, and to see kids improve and adding an educational part to the camps is unique. I've always had to work hard for everything I have and I want the kids to learn that same work ethic, so they can achieve something great in their lives."

Michaud is a perfect example for youth players. He is someone who needed to work for everything he has. He took care of business in the classroom and he is giving back to the town he grew up in, but perhaps the most important thing is his attitude toward life.

"It is too easy to go through life and not give back," Michaud said. "I was one of those kids and I want them to go to school and get their education and maybe realize a dream as well."

Michaud shares his phone number with all the kids he coaches. If they ever need anything, he answers the phone and offers advice.

Now, Michaud will try and show an NHL team just how good he is and how he can help their franchise while also using his intelligence on the ice.

"I think my main strength is my hockey IQ level and the fact that I am a 300-foot player," Michaud said. "I play hard on offense and defense. I am an average skater, and I am smaller in size for an NHL player. But I think my advantage is I can outsmart players with my reads and be more elusive and agile and use that to my advantage."

As Michaud gets ready for camp in just a month, he is working on his game at home.

"I skate a lot in Cloquet, Superior and Duluth and I work out at Park Avenue Fitness Center in Cloquet," Michaud said. "I have a skill session, work on power skating and I work on finite details that can make me better."

Regardless of whether Michaud makes the NHL or not, the one thing he has proven already is he is someone who cares about kids and people, works on his craft and has his priorities in order. His work ethic and his attitude assure that he will make his mark on any community he decides to live in once his playing career is over.

"My agenda in life is how can I make someone's life better every day," Michaud said. "I want to do the little things that make life awesome and help make people's lives better."