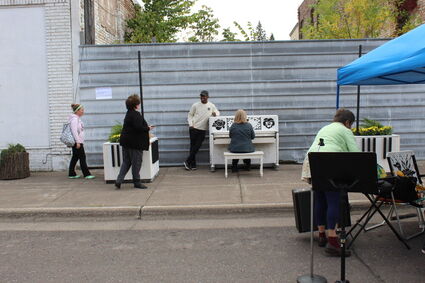 The Ivory Garden, an outdoor piano and garden boxes next to Wood City Nutrition, attracted a lot of interest Saturday. Krista Gardner spent months weatherproofing and decorating the piano with tile mosaic. It will sit outside for probably another month and then come back out after the snow melts next spring, ready for anyone who wants to make music.

Hundreds of people made their way to Cloquet’s most historic business district Saturday to walk the streets and shop, eat, dance and commune with old and new friends and acquaintances.

Part art fair, part block party, part car show and part market, there was something for everyone, including food and drink from four local food trucks along with Common Ground Coffee Bar & Deli, which was bustling all day long, according to manager Maggie Schulstrom.

“It was really great to see all the local community people come down,” Schulstrom said, adding that a lot of people said they would come back again. “And I loved the pop-up music. People just loved having places to go and people to see.”

In all, five blocks’ worth of streets were blocked off so vendors could set up and people could meander on foot. Think combination art fair, block party, market and food court, all surrounded by buildings that are among Cloquet’s oldest.

There was music on nearly every block — busker style — and vendors offering everything from blacksmithing and yoga demonstrations to clothing to all-natural soaps along with a wide variety of arts and crafts. For kids, there was mask making with County Seat, singing with Music Together, blacksmithing, art projects and space to roam. For car buffs, there were cars on display outside of Bridges Customs at Vine and Avenue B. Just down the street, Boy Scout Troop 171 were teaching archery, demonstrating Dutch Oven cooking and selling popcorn and pea soup dinner tickets in addition to volunteering their youthful energy with set up.

Outside one of several vacant buildings in the West End, organizers invited people to share their ideas for a more vibrant business community. Some of the answers were drawn, others written down. The ideas ran the gamut: Brewery! An art class, an animal shelter, trampoline park, thrift store and multiple requests for a restaurant and/or brewery. Other suggestions included a hobby supply store, a “play place,” more flowers and even a fire pit.

Someone drew a tree and flowers, someone else a Game Stop store. Another budding artist created a vision including the river with a walking path, live music, a bookstore, bakery, bistros and wine bars along with a monthly craft market. “Imagine Paris in the 1920s,” they wrote.

Judging by the positive reactions to Saturday’s event, Pine Knot News ad director Ivan Hohnstadt — who was the brains behind the event — said the Pine Knot may make it an annual affair, or even a spring and fall thing, depending on volunteer or West End business owner support.

“I thought this was a great way to get the community together and bring some attention to the West End,” said Kristen Kozelouzek of Swells and Flutter, who sold handcrafted jewelry and art. “It was fun chatting with everyone that stopped by and we loved that so many people brought their dogs out to walk around.” 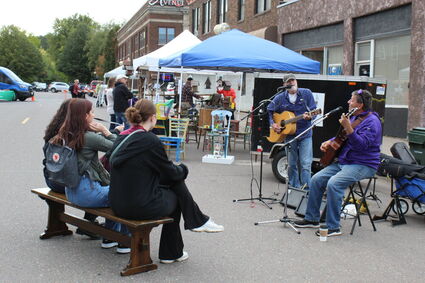 Library director Beth Sorenson said they saw a lot of people she doesn’t see in the library, so it was nice to be able to let them know about some of the services, programs and materials they have available.

“There were also some businesses and organizations that I didn’t know were available in town so it gave me a better perspective of the community,” Sorenson said.

Saturday’s event accomplished several goals, Hohnstadt said. It brought people together; it highlighted many of the West End grant projects — including the debut of the Ivory Garden, a new outdoor piano and garden boxes next to Wood City Nutrition created by Krista Gardner — and it reminded people of what’s already here, so they will visit more often, or consider becoming part of this growing business community.