New generation takes over at B&B 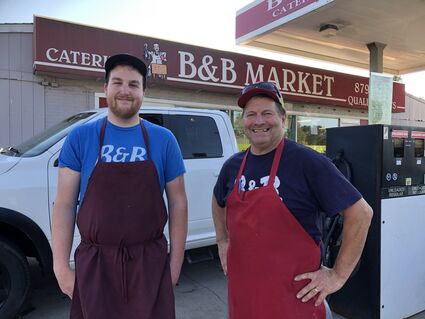 Jake Richardson is the new owner of Cloquet's B&B Market. John Lind and his wife, Kim, sold the business to the longtime employee, who is 24. John was 26 and Kim was 24 when they took over the store.

Three years ago, a stranger from New Jersey wanted to buy B&B Market, but Kim Lind turned him down. "Whatever I wanted he would have paid, but I couldn't do it," she said. "Because I still have to live here. You have to be involved in the community."

Just over a month ago, however, Kim and John Lind signed the sale papers for their beloved store at 506 Big Lake Road. They had a buyer they believed in. And maybe because - after 33 years of running around like crazy, a pandemic and three young grandchildren - selling seemed a little more appealing.

The new owner, Cloquet's Jake Richardson, has worked at B&B for eight years, since he was 15. He bought the store and the catering business on Aug. 27. Richardson turned 24 on Wednesday, and celebrated by working all day.

Richardson says he has no plans to change things. He seems perfectly fine with the suddenly frenetic pace of life as the new owner of the grocery store/meat market/catering company and gas station.

"It's weird how life pushes you along and you find something you love," he said. "B&B is a chaotic mess, but it's a fun chaotic mess. My days went by fast before, now my weeks go by fast."

For now, the Linds hold the record for owning the store - built in 1957-58 - at nearly 33 years. Kim's parents, Hawk and Dorothy Huard, owned it for 10 years before John and Kim took over in 1988. The Peccis built the store, then sold it to the Shandas. The name of the store came from Bob and Babe Coughlin, who purchased it from Shandas. The Huards bought from the Coughlins.

Back then, corner grocery stores were common, with at least a dozen in Cloquet, all owned by local families.

"There's not many ma-and-pas like us left. Now there's us and TJ's, that's about it," said John. "Small businesses like ours are great community supporters."

The first year they owned the store, they rented the meat counter to some friends, because John also worked for Coca Cola. Then he decided he'd rather do the store full-time.

"He was the deli manager at Super One when we met, but he didn't know how to cut meat. He went to the library and got a book, and that's how he learned how," Kim said, adding that John was her boss at the deli when they first started dating.

In the three decades that followed, John and Kim built up the store, while raising three children: Nick, Rebecca (now Thompson) and Ryan. "It's a blur," Kim said.

Fortunately, they live just down the road. When the kids were born, they would take turns being at work or taking care of kids. They had an office in the house, so that helped.

Now all three kids are grown, and the whole extended family lives in the same neighborhood. Their daughter's backyard touches theirs, the boys live across the street on two different lots. Kim's parents and her brother and sister live close by too, most of them on land her grandfather owned.

In the past 30 years since they bought B&B, it's kept growing. They've done four remodels, said John. They added pop coolers, the catering kitchen and more. What is now the office was a barbershop with steps to the outdoors (now a room filled with canned and bottled drinks).

In the meantime, Walmart moved into town, Fond du Lac Gas & Grocery opened up, four Kwik Trips moved into the area and a new Aldi store came to town. "You have to keep changing and adding things to keep up," Kim said, adding that they keep gas prices down to draw people in.

Yet, they are busier than ever. Customer loyalty is a big factor, too.

Richardson said the response to the news has been good.

"Most people just say, 'oh, it's you. That's good," said the 2016 Cloquet grad. "A lot of them have seen me at catering events and the meat counter. They like that it's not an outsider, and people say I have a good personality and I'm approachable.

"But you'll always have people who say I'm not John. That's OK. I'll try my best. John and Kim left big shoes to fill, and I'm forever grateful to them."

John, with his big red apron and ballcap, is the face of B&B to many people, even more so since he started livestreaming weekly specials on Facebook. He has a gravelly voice and an easy laugh. He knows a lot of names and even more faces. His day-to-day conversation is punctuated with "hon" and "dear" ... "I'll be right there, dear," he tells a customer. He is a hard worker, easy to talk to, but tough to stop because he's always moving on to the next job, the next chore, whether it's picking up pumpkins and straw, delivering groceries, or organizing a community food shelf in the middle of a pandemic.

The longtime business was honored by the Chamber in part because of the amazing "food train" they ran for over a year during the pandemic. A single donation from customer Lenny Conklin sparked the beginning of the B&B food train, which saw community members and people from all over the state, country and world donate money to help buy food for community members in need at B&B.

"It was a really good thing, and helped a lot of people in the community," he said. "There was a tremendous amount of people that needed the help - there still is. The funds have run out for right now, and if this new Covid gets bad maybe it will start up again."

The community involvement - being such a core part of things here - is definitely part of the appeal for Richardson. He grew up with B&B, their name scrawled across lots of youth sports shirts as sponsors, then watched the food train grow during the pandemic. "I appreciate all that they do, with giving back," he said.

Richardson talked about how his grandfather, Denny Randelin - a former Cloquet police detective and Carlton mayor - truly believed in the Rotary's "Service above Self" motto.

"He taught us about that, and that's what B&B does, with helping others," he said. "I'm going to continue that."

Richardson was only 20 when he first decided he might like to buy the store. He tells how he and John were working together at a cookout, and John looked beat at the end. Making conversation, Richardson asked John about their long-term plans for the store. John told him they had hoped one of their three kids would want to take over, but they weren't very interested.

"Next, he said he'd like to keep it in the community, ideally having an employee take over," Richardson said. "I let that marinate a couple days and thought 'I could do that, I do a lot of work in the back, a lot of catering. I might as well own it.' And now here we are."

Like the Linds when they bought the store, Richardson is recently married to Mikayla (Paulson). They met and fell in love at Mankato State, where he studied accounting, business law and financial management while working part-time at B&B. Mikayla has a master's degree from St. Scholastica and works in cardiac rehab at Essentia, but now works part-time at B&B too.

"He knows what he's doing and plans to keep everything the same," Strand said. "It's great." 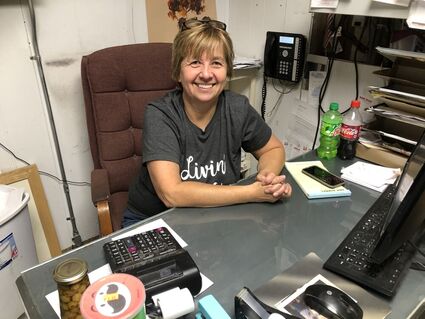 Kim Lind keps things in line at B&B from a back office.

Kim marvels that this year - after Richardson bought the store - was the first Labor Day that John didn't go into the store at all. She's hoping they will have more time at Christmas to enjoy family time, too.

"I'm going to miss it, I'm gonna miss a lot of the customers, but I'll probably be here another year at least to help with the transition," John said. "And I hope people continue to come here and support Jake and the store."

"I can't imagine shopping anywhere else," she said.

She also can't imagine her husband slowing down.

Asked Tuesday if he expects to go out and get another job when that ends, John indicates he has other things to do first.