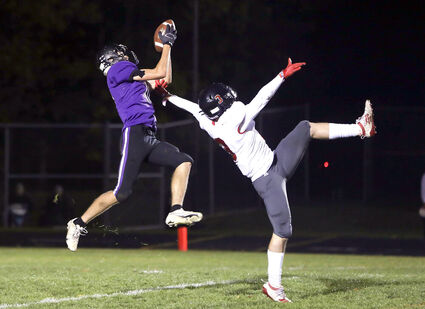 Cloquet's Matthew Erickson leaps to intercept a pass over Duluth East receiver Connery Wiecks during Friday night's homecoming football game on Bromberg Field. It was a bright spot in a 21-7 loss for the Lumberjacks.

The first half of the Cloquet vs. Duluth East football game was all about the Greyhounds and their star running back Austan Orvedahl. Eventually, the Lumberjacks defense found answers for Orvedahl, but they struggled with their own offense and ended up losing 21-7 on homecoming night at Rol Bromberg Field in Cloquet.

The Greyhounds wasted no time scoring early in the game. On their first drive it was Orvedahl right, Orvedahl left, and eventually Orvedahl scored on a 3-yard touchdown run with 9:15 left to go in the first quarter. After Mike Kastelic booted the extra point kick it was East up 7-0.

"Orvedahl is a really good running back and is one of the better ones we will face this year," said Cloquet coach Tom Lenarz. "East is big up front and we knew that we would have to tackle better to have a chance to win the game."

Cloquet managed to hang tight with the Greyhounds for the remainder of the first quarter and after a lengthy drive the Lumberjacks tied the score when Reese Sheldon raced in from 16 yards away. Dayne Painovich added the extra point kick, and the game was even at 7-7.

Things got dicey for Cloquet when a sequence of events allowed the Greyhounds to advance from deep in their own end of the field when the 'Jacks took a pair of 15-yard penalties on the same play. Those penalties allowed East to advance to midfield and eventually score on a 1-yard touchdown plunge to push the lead to 14-7 with 2:13 left in the first quarter.

"That is something we have been dealing with all year," Lenarz said. "I can live with some kinds of penalties, ones where kids are just playing hard and get caught out of position or the ref thinks he sees something that may or may not be there. Holding is a good example of that kind. But I don't have a lot of patience for selfish penalties that hurt the team. It's frustrating to get any sort of unsportsmanlike call because it is just one player doing or saying something that they know they shouldn't. We need to be more disciplined than that."

Penalties hurt the 'Jacks the entire game: they ended the game with 110 yards in penalties, but they were especially hurtful in the first half.

Orvedahl made the Lumberjacks pay one more time before halftime when he bolted in from 7 yards out to make it 21-7 with just 47 seconds remaining.

The second half the Lumberjacks made some defensive adjustments and managed to stonewall the East offense.

"We just focused on basics in the second half and guys doing their job, which has been one of the things we keep repeating," Lenarz said. "Too many times players try to do too much, especially in situations like we are in where we have lost two pretty close games. They start pressing and we have breakdowns. We did a better job of managing that Friday night."

The Lumberjacks piled up plenty of offensive yardage in the second half, only to be stopped by penalties or turnovers.

By the end of the game, the teams' offensive statistics were nearly identical, with Cloquet gaining 262 total yards to the 269 yards by the Greyhounds.

Despite the loss, Lenarz was happy with the way his team responded after falling behind early. He saw some things that he thinks will bode well for the 'Jacks down the line.

"We did some good things and then came back and look like we haven't practiced once," Lenarz said. "We have yet to play a consistent game from start to finish. I feel like we are just a few big plays away from breaking things open, but we just haven't been able to get over the hump. We just need to keep working at it and trust that it will come together."

Reese Sheldon led the offense with 93 rushing yards and went 5 of 9 passing, good for 77 yards. 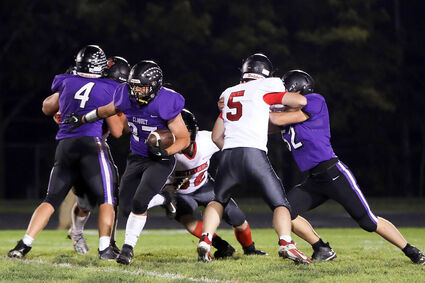 Cloquet's Marshall Hayes runs through a hole created by teammates Will Turnbull (4) and Josiah Larson during Friday night's game. Look for more photos online at PineKnotNews.com

"We were close Friday, but we had three drops for easy scores, we gave up a first down on a fake punt, then we had back-to-back penalties inside the 10-yard line, plus the 30-yard penalty that extended an East drive," said Lenarz. "If any of those things go the other way, it's a different game. That's the fun and the frustration that make high school football so special."

He gave a shoutout to Lance Konietzko, who he said has been consistently one of the better players this season.

"Lance has been tremendous on the offensive line and that is one of the more difficult jobs that we have to offer. I have been very impressed with his play this year," Lenarz said.

As far as moving ahead to next week, and throughout the season, the veteran coach said the important thing is staying together as a team.

"We can't make excuses and/or start turning on each other," Lenarz said. "We still have a lot of football left to play this year and have control of our own destiny in terms of playoffs. We will ask the kids to just keep improving each week. We want to play our best football at the end of the season. We are not there yet."