Raptors get back on field, take care of business 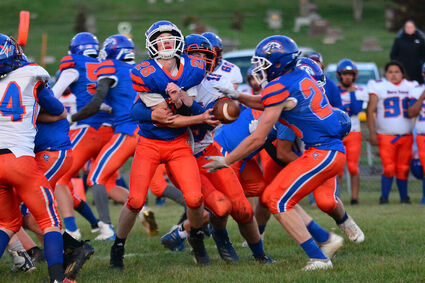 Last week the Carlton/Wrenshall Raptors football team had to take a week off due to Covid restrictions and was unable to play their scheduled game with South Ridge. This week the Raptors got in a much-needed home game and came away with a solid 13-6 come-from-behind victory over North Central.

"We had a solid game on defense," said Raptors coach Jeremy Zywicki. "We don't have a lot of bodies, but the guys played hard and played well."

In their third year as a cooperative team, numbers are a challenge. The Raptors have only 13 players on their roster, but at times this year they've had only 10 for a game with one injured and unable to play - meaning all nine available players had to play the entire game.

In Friday's win over North Central, the Raptors fell behind 6-0 midway into the second quarter and that's how things stood up to halftime.

"I told the guys prior to the game that this was going to be a really grind-it-out style of game," Zywicki said. "North Central is a team that likes to pound the ball and run it hard, so we knew it was going to be tough."

The Stars are made up of players from the towns of Northome/Kelliher and Littlefork-Big Falls. 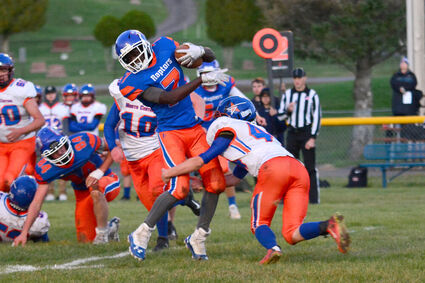 "At halftime I felt good about how we were playing," Zywicki said. "I thought we were playing well and gave up the only score on a long run of about 50 yards. I thought they were also doing some stuff to confuse our offensive line in the first half that we needed to address at halftime. We changed our blocking scheme and our line made some nice adjustments."

It worked. About six minutes into the third quarter, the Raptors grabbed the lead on a touchdown by Wes Ward and eventually the final score of the game in the fourth quarter on a run by Austin Larva.

Larva had a huge night running the football with 15 carries for 215 yards.

Zywicki said the team is learning and improving with every game.

"We don't have a lot of experienced players even though we have some older players on the roster," Zywicki said. "We just don't have ... a lot of playing experience. We are progressing every game and we are getting better, and that's been fun to watch."