When Pinehurst was the epicenter of fun 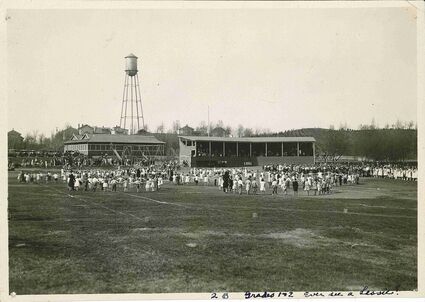 The layout at Cloquet's Pinehurst Park has changed significantly since this photo of a community celebration there was taken in probably the 1920s or 1930s.

Pinehurst Park looms large in my memories of growing up in Cloquet during the 1940s and 1950s. Daily life during that post-Depression Era meant every penny had to be accounted for. Families had to plan very carefully when and if you could buy anything. If you could buy it, you either had to make it or grow it. During that time we had two major wars - World War II and the Korean War - that very much limited what you could buy.

But for us kids, not having money didn't matter so much. We gathered for free at the many fields in West Cloquet for sports: football, baseball, basketball, softball, golf, etc. and we never ran out of kids because of the large families we had on the West End.

But Pinehurst Park was the most special place. We were lucky to have it for sports and recreation for all ages. It was the center of our town for decades, long before Highway 33 made it a lesser place, geographically at least.

There was so much down there: beautiful flower gardens, the bandshell, the pavilion, softball, carnivals, July Fourth fireworks and all kinds of community events and gatherings. Thousands of people would come down for events, celebrating and doing things. I'd be hiding under my mother's coat, afraid of the fireworks going off when I was a kid. It was a busy place.

Linda Erickson remembers that during the carnival, they would set up the paratrooper ride next to the pond so when you rode on it, you'd go out over the water. That ride was like a chair lift, but it went around instead of up and down.

The building that I used most was the large one where we would roller skate one or two days a week in a huge building that sat near what the tennis courts are today. The Wilsons would come from Moose Lake with skates to rent. They had music playing and we could dance (on skates). We would have hundreds of kids roller skating during the summer. In the winter, they'd close it up with shutters but if there was something special going on, they could use it even then. We'd walk from Larch Street to Sacred Heart school in the 1940s, could take shelter in that building if it was raining, that was nice.

The same evenings we had skating, there was fastpitch softball, which was very entertaining for both adults and children. The softball field hasn't moved, but in those days there were huge bleachers with a roof over them overlooking the fields. Sometime in the 1940s, they tore down the covered softball stands and put in bleachers with no cover over them.

The park was bigger then. That big hill the kids slide on now went all the way over to where the Cloquet Veterinary Hospital sits. They removed half the hill to make Highway 33 and filled in the pond. Where the pool is now was a bigger pond, smaller than what is there today. You could swim there if you wanted but it was just a pond.

There once was a road behind the bandshell, with a big greenhouse. Tony Latulip had the greenhouse, he'd help clear the ice on the pond in the winter. 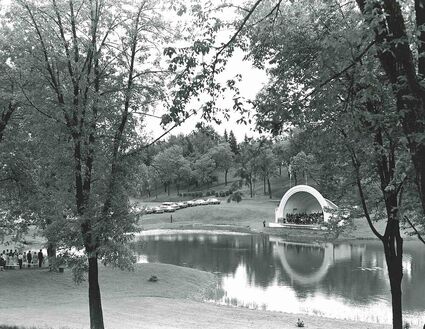 One of many performances in the bandshell in the 1960s or 1970s, which often featured the Cloquet High School band or the community band. People would sit across the pond from the bandshell to enjoy the music.

There were swings and teeter totters and all kinds of stuff between the softball field and its massive bleachers and the other building. There was ice skating in the winter on the pond, and a warming house where the pool building is now. There was another pond in the low area between a softball field and Minnesota Highway 33.

I started writing this after one of the better softball players from back then, Bill Meisner, passed away recently at age 94. He played on the teams that won six state championships in that time period. Age is catching up to the people who used to live and enjoy that time at Pinehurst Park, so I wanted to share those memories with the next generations.

Clarence Badger was born and raised in Cloquet, and taught business classes at Cloquet High School for 28 years. He and his wife, Patty, raised four children here and have seven grandchildren and lots of memories.