Haunts keep coming at the 'Shack' 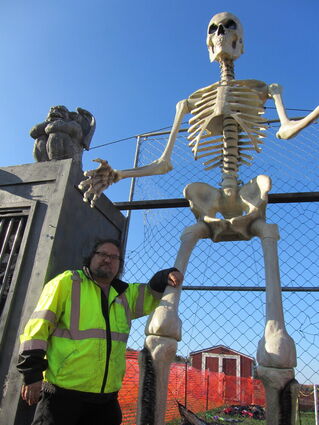 Pat Stojevich stands next to a giant skeleton on the Haunted Shack grounds south of Carlton this month. The annual scare trail and indoor maze is open for 11 nights beginning tonight and running to the end of the month.

Take a late afternoon tour of the grounds at the Haunted Shack with Pat Stojevich and you get the feeling that the name is a misnomer.

It should be Love Shack, or Family Shack, Survivor Shack or even "Hey, I Got a Kidney" Shack.

An energized Stojevich obviously still loves the monthlong dive into scaring people to raise money for charities. He's been at it for 28 years, making his operation the oldest of its type in the state and one of the oldest in the country.

The Haunted Shack is a three-stage scare on the Ru-Ridge farm 3 miles south of Carlton on the road to Wrenshall. For 11 nights beginning tonight, there will be hayrides on an outdoor trail filled with creepy scenes, then a cornfield walk with more in-your-face offerings. The end is the maze of rooms inside the shack, which employ a lifetime of Stojevich's decoration finds. All of it is plugged in with light and sound.

The operation is making it through the Covid-19 pandemic and a two-year health scare for Stojevich. When asked how it's going, he is more than happy to blurt out "I got a kidney." He was put on a transplant list last year after he discovered in 2019 his kidney was failing. He got a transplant in February.

He feels great, probably too great, he said, because he's working harder than ever in getting the shack in shape. His doctors cringe, he said.

The pandemic forced the Stojevichs family to pivot. Because they decided to have fewer actors and guard against Covid exposure last year, Stojevich's son, Logan, who is officially a co-director, went to work on animatronics and other mechanisms to provide movement with the displays. They went from 28 people providing movement and scares in the shack to just 8, Stojevich said.

It works in these Covid seasons and will likely make the shack more manageable in the future, he said.

"It's tough finding volunteers these days," he said.

There is a great core of people he works with but the numbers have dwindled. It's more work than people bargain for, he said, and many of the jobs are outdoors in fickle weather. He said he needs 90 volunteers to run the operation at peak creepiness.

Groups have always been encouraged to bring people in to raise money for their own charity. Haunted Shack proceeds go to a variety of groups in the region, notably the Special Olympics and Duluth's CHUM, which looks after the homeless community. People coming to the grounds are asked to bring a nonperishable food item or a winter coat for ticket discounts.

Volunteers can do a variety of jobs, and they don't all involve taking up a costume and makeup and trying to scare people. There's parking, moving stuff around, even driving a tractor.

Stojevich figures the shack was down 2,000 visitors last year due to Covid. But there was something to it all. "In all the 28 years, it was the most peaceful," he said.

There isn't a requirement for masks, but safety and common sense are stressed, he said.

It really started when Stojevich was a kid. "A sheet on a string and a tape recorder," he said of one of his first Halloween displays. As an adult, he did up his yard, eventually leading to the first officially named Haunted Shack in West Duluth and a variety of places since. Ru-Ridge has been home since 2018.

It's still a perfect match, Stojevich said. People can take in the corn maze and family fun by day and get spooked at night. "It's a destination, all-day stop," he said.

Inside the shack, it's tradition to post photos, in a room early on in the maze, of past volunteers who have died. Other rooms are done by family members young and old, and are filled with finds Stojevich keeps an eye out for all year round.

As for that longevity. Walk-through haunted houses were all the rage in the 1980s, Stojevich said, often as quick fundraisers for churches or other community groups. But after a while, people realized it took a lot of work, and persistence, to put a show on each year. The number of them dwindled and only the best organized and - Stojevich proudly says - best shows kept at it.

The Haunted Shack is not a business, he said, it's a volunteer operation that survives on his and others' passion for Halloween spooking. "We give it all back," he said of the money raised.

The setup and teardown is much easier at Ru-Ridge because the shack is permanent, as well as the trail, where displays stay up and weather year-round, adding to the authenticity of the scenes year to year, Stojevich said. It's all getting easier and more streamlined, he said.

The persistent fog this week rolled in again from the St. Louis River as evening came. Stojevich's volunteer team was trickling in and getting things together. The cornfield took on a mystical air, and the buildings became enveloped in the mist. Now, the Haunted Shack name made all the sense in the world. 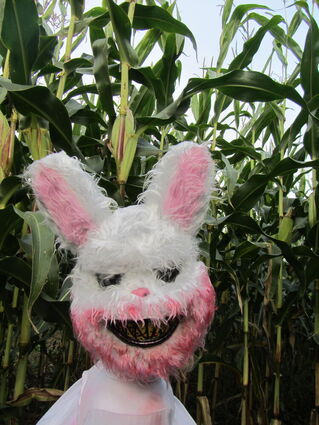 A creepy rabbit awaits visitors to the cornfield on the grounds of the Haunted Shack.

The Ru-Ridge Corn Maze is open Thursday-Sunday through Halloween at 1781 County Road 1, Carlton.

Bringing a nonperishable food item saves $2 off the admission price. A coat for the coat drive will net a $5 discount. Go to hauntedshack.com for details and visit hauntedshack.com/hauntedRidge for other activities or visit the Facebook pages for Haunted Shack, Ru-Ridge Corn Maze and Haunted Ridge.