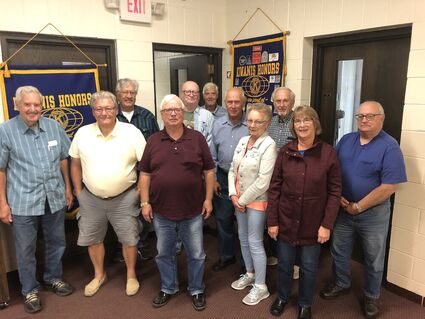 The Cloquet Area Golden K Kiwanis club is no longer. Its members met for the last time as a club on the last Tuesday in September.

The Golden K group was Cloquet's final Kiwanis chapter to disband, said president Ray Hatinen. The Noon Club started in the 1950s and ended just a few years ago. The Morning Club started in 1976 and met at 7 a.m., before the workday. It, too, went away.

While the pandemic certainly did some damage to the longtime local organization, so did age and a lack of interest from younger generations. They don't appear to volunteer the same way their elders did, or join organizations and clubs like the Kiwanis. So its members were mostly older retired residents who had time to meet, and years of service to the organization. And they lost a lot of members every winter as snowbirds relocated to warmer climates.

But society has changed too. Longtime member Jody Vinopal remembered how her bank employer encouraged people to volunteer and join service organizations like the Kiwanis "for the community's sake," she said.

Service and social clubs and organizations thrived back when small business was all local, back when a Weyerhaeuser actually lived here, and the paper mill was owned by a company with more ties to the region.

"Especially the bigger companies used to [encourage people to get involved], because they had more employees and didn't miss them so much when they went to a lunch meeting or a volunteer event," Vinopal said, acknowledging that staffing levels are dramatically lower at many businesses today, comparing the 25 to 30 people that worked at the bank when she was there to the three or four she sees now.

Change is constant, though. Mary Lukkarila pointed out that women weren't allowed to join Kiwanis until 1987.

The retired library director said Covid-19 was tough on the club. They didn't meet throughout the worst days of the pandemic, and meeting via Zoom or some other livestreaming app wasn't really a viable option.

"It's difficult to do these online things with older members," Lukkarila said.

The mission of Kiwanis International and all of its chapters is service to children. Locally, the Kiwanis have been involved in Special Olympics, sponsoring parts of the Fourth of July celebration and local toy drives, and raising funds for worldwide initiatives such as maternal tetanus shots and iodine deficiency. It even built toilets, like those in Braun Park, longtime member Barry Bergquist said.

Member Clarence Badger worries about the future. "As organizations like this stop being involved, it's going to make a tremendous difference in what's going on here," he said.

When asked what kept them coming to meetings, the answers came fast.

"It's the camaraderie of these wonderful people," Berthiaume said.

"I got involved because of the community service. They did a lot of good for many people in Cloquet," said Barry Bergquist. "But it's also fun, and we heard different speakers every week."

"I liked the programs and the services," Lukkarila said. "It helped me learn a lot more about the community. And giving back is important." 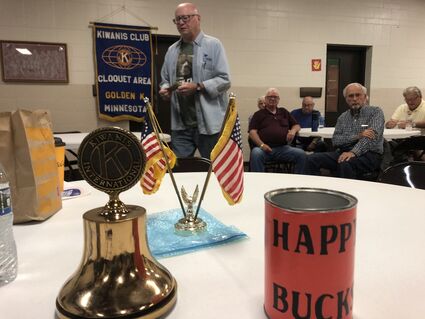 Lukkarila and Schlenvogt both said they liked the mission of service to youth and community.

The group held its final meeting as a Kiwanis club at Perkins on Sept. 28.

Although it was the end of the Golden K service club, it won't be the end of the friendships forged there. Many members plan to meet at 8 a.m. Tuesdays at the Senior Center in Cloquet, except for the last Tuesday of the month, when they will meet Perkins.

They are calling themselves the Golden Club because they are no longer affiliated with Kiwanis International.

"We want to keep meeting and perhaps take on service projects in the future, depending on Covid and things like that," Schlenvogt said. "Maybe we can get some youngsters to join, you know, people in their 50s and 60s."

Many members probably will still volunteer to read to preschoolers, although Vinopal wondered if they would still be able to afford free books to the classrooms. Post-pandemic, they'd like to get their pancake fundraiser up and running again, so maybe they can find a different way than Kiwanis International to get the books.