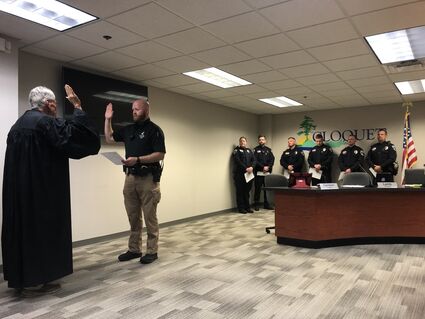 Cloquet school resource officer Trevor Kaldor takes his turn being sworn in by Judge Robert Macaulay during the Tuesday Cloquet City Council meeting. It was the first swearing-in ceremony held since the pandemic began, so all of the hires since then participated, including Kevin Holshouser, Brody Nordquist, Elijah Haglund, Travis Magdzas, Ronald Timmons and Megan Conley.

Since taking over as interim, and then appointed, police chief two years ago, Cloquet police chief Derek Randall has been slowly building the police department back up to full strength, after a flood of retirements and disability claims reduced the department by close to 30 percent in 2019.

On Tuesday, the department held a public celebration of sorts, swearing in every officer hired since the pandemic began. There were seven of them, which brings the department just shy of its budgeted total of 24 licensed full-time police officers, detectives and command staff.