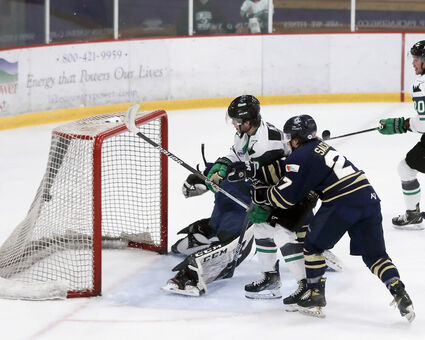 After starting the season 0-2-1, the Minnesota Wilderness have reeled off five straight wins, including a pair of wins this past weekend at home against the Janesville Jets.

"It was a nice weekend and both games were exciting right to the end," said Wilderness coach Dave Boitz. "It was a big weekend for the boys and nothing came easy."

Both games ended in 6-5 wins for the Wilderness, now in fourth place in the eight-team Midwest Division of the North American Hockey League.

Friday night the Wilderness gave up a power play goal just 3:20 into the first period and things looked bleak until Ethan Wolthers, who had a big weekend for the Wilderness, scored at the 6:45 mark of the opening stanza on an assist from Bryce Howard. At 12:07 William Persson gave the Wilderness a lead with assists going to Max Neil and Gunnar Thoreson on the power play as Minnesota led it 2-1 after one period.

The second period was wild, with both teams scoring three goals. Howard gave the Wilderness a 3-1 lead at 1:54 with Wolthers and Cole Crusberg-Roseen assisting. Grayden Daul cut the gap for the Jets at 5:06 to 3-2, but the Wilderness answered with back-to-back goals from Matt McQuade and Crusberg-Roseen to push the lead to 5-2. Unfortunately, the scoring wasn't over yet. Before the period ended, the Jets scored a pair of goals within two minutes as the second period concluded with the Wilderness up 5-4.

"It was just a crazy period of hockey," said Boitz, who is also the general manager of the Wilderness. "Even though we were up 5-2 at one point in the second period, we weren't playing great."

Janesville made things even more interesting when they tied the game up at 7:46 of the third period on a goal from Cy LeClerc.

"I like how we answered after that goal," Boitz said. "The guys buckled down and found a way to get the job done."

With just 2:11 remaining in regulation, Nico Rexine rammed home the game winner for the Wilderness, giving them the 6-5 opening night win behind a 23-save effort from Jake Zacharewicz on 28 shots.

Saturday night's affair was more of the same with plenty of craziness to go around for the fans in the stands.

Janesville put a scare into the hometown squad by notching the first two goals of the night at 8:25 and 15:19. The Wilderness put a charge back into the crowd, by answering with goals from Hayden Kruse at 18:06 and Bobby Metz just 54 seconds later at the 19:00 minute mark. Amazingly, the Jets then responded with a goal with just 11 seconds left in the first period and the guests came out of the opening stanza leading 3-2.

"We just didn't come out with a lot of energy at first," Boitz said. "The second period we played terrific and the guys came out flying."

The Wilderness got goals from Rexine, Thoreson and Wolthers to go from a goal down to leading by a score of 5-3. "To put it bluntly, we kicked butt in that second period," Boitz said. "We were playing great and then all of a sudden that changed in the third period again."

Janesville, desperate to get back into the game, scored on back-to-back goals from Jan Lasak at 15:56 and 18:21 and suddenly the game was tied at 5-5 with the Jets carrying all the momentum.

"We have a really good group of guys that want to win and they want to put the work in," Boitz said. "That's a good combination and we found a way to win again on Saturday." 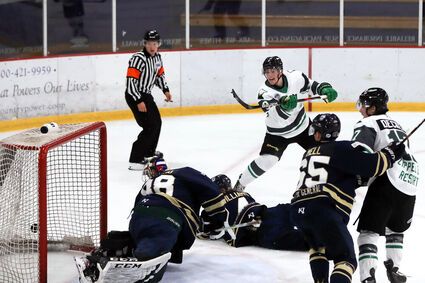 Niko Rexine scores the game-winning goal for the Wilderness past Janesville goaltender Michael D'Orazio during Friday's game at Northwoods Arena.

The win came the Wilderness' way when Wolthers slammed home a feed from Max Ruoho to give them the victory.

For the second night in a row, Zacharewicz made just enough saves to get the win in goal.

"It's kind of funny, I was talking with Jake on Thursday and he said he isn't playing up to where he wants to be," said Boitz of his goalie. "But, he also said he didn't care if we won '6-5 as long as we win, that's all I care about' and those are the scores we won both games by."

The next step for the Wilderness is to continue the climb up the division ladder.

"We have some things to clean up, but I like our competition level," Boitz said. "We only have four or five returning guys, so it's taken a little time to get used to each other, but I think we are starting to see just how good this group can be."