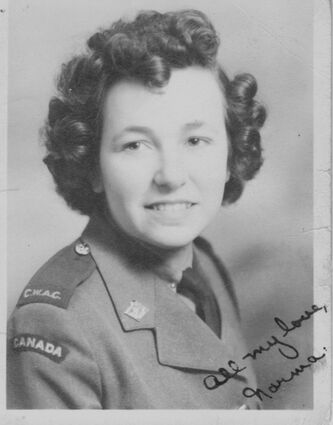 Norma Winnifred (Groves) Andrew, 97, passed away in Phoenix on Aug. 31, 2021. Born June 1, 1924, to parents Arthur William Henry Groves and Winnifred Edith (Brown) Groves of Orillia, Ontario, Canada, Norma was the eldest daughter among seven siblings. She was interred at St. Andrews and St. James Cemetery in Orillia on Oct. 2.

Norma's first job was in Orillia as a Bell Telephone of Canada switchboard operator, where she worked her first year after high school. In 1943, at age 19, she enlisted in the Canadian Women's Army Corps, serving in Vancouver, British Columbia before meeting and marrying U.S. Army veteran Robert E. Soden of Seattle after the war.

She was the mother of three children, Roberta Soden Brill, Marybeth Claire Gottshall and Timothy Soden-Groves.

Norma traveled the world as an army wife from 1950 to 1968, packing up and moving her young family to Germany (1954-1956), Korea (1962-1965) and many military assignments around the United States, including Fort Leonard Wood, Missouri; Fort Belvoir, Virginia; Fort Carson, Colorado; and in Ames, Iowa and Detroit.

At age 38, Norma received a bachelor of science degree in modern languages from Iowa State University, where she was a member of Phi Kappa Phi, graduating with honors in 1962.

As an undergraduate, Norma loved to tutor English composition students at the university. She often invited her students to the family residence in Ames for a homecooked meal, giving her young children the opportunity to get to know diverse students and student-athletes from all over the country.

After college she continued this tradition, hosting families and friends from different cultures around the world while traveling, living and learning widely.

She later worked as a proofreader and editor at Iowa State University Press and - after moving back to her beloved Canada - she worked as an editor for both IBM Press and publisher Prentice Hall in Toronto.

Her second marriage was to Gordon Andrew of Orillia, Ontario. Norma and Gord retired to their beautiful stone cottage on Lake Simcoe's Moon's Bay, just outside of Orillia.

Norma loved languages and she loved to write. When an important occasion came up - a son or daughter completing a marathon, the birth of a great-grandson, or the passing of a parent - she would write a poem about it. At age 80, she re-learned the German language for a river cruise down the Danube with her two daughters as they revisited the Europe they remembered from the 1950s.

Norma's sense of humor was ever-present; her laughter infectious; her loving support of family constant. When her granddaughter filled her favorite china teapot with toads, Norma just laughed and proudly told others that the child had discovered a practical new use for good china. At tearful family farewells the sophisticated and always gracious Norma would break the tension with a sly smile while offering up an obscene hand gesture as a final wave goodbye, leaving everyone in stitches as they went their way. 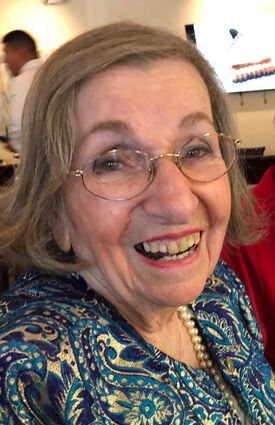 A video, "Norma Winnifred Andrew (Groves): A Life Well-Lived," chronicles Norma's life with a century of photographs capturing the wonderful 97-year lifespan, laughter and world travels of the eldest daughter of Arthur and Edith Groves of Orillia, Ontario, Canada. View it at http://www.mothygroves.com/2021/10/07/norma andrew.