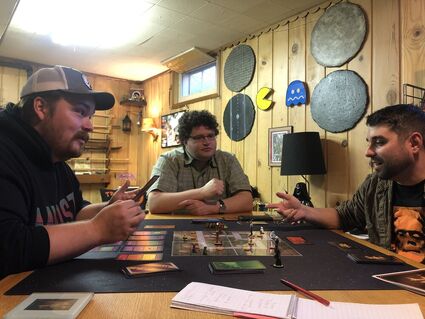 Steven Kruger, Andrew Frank and Darrell Davey play All Hallows' Eve, a game Davey designed, created and produced that sets monsters against trick-or-treaters on Halloween. After four years of development, Davey is now selling his game at events like the upcoming DuluCon.

Darrell Davey is not afraid to reveal his inner nerd in conversation about games or all things ghoulish. And when something manages to combine the two - like his own All Hallows' Eve game - the Cloquet man enters a different dimension.

Asked to describe the game he created, designed and is now selling, Davey starts with "it's like dudes on board, PVP," before translating the acronym as "player versus player."

Explaining the game to newbies, Davey refers to the trick-or-treaters in his game as "sentient candy beings" rather than kids. (It makes the game more palatable to the average grandparent.)

While the idea of sweets is certainly part of All Hallows' Eve, this is no Candy Land. Rather, it targets preteen and older players - think PG-13 - who are capable of strategizing and understanding each monster's special powers and the twists and turns the candy cards bring to the game.

In short, it's complicated.

The game requires patience, and strategy. At the start of each round, the chaperone moves each tiny candy-seeking trick-or-treater toward a lighted doorstep with a token waiting to be turned over. If the token says "LO," for "lights out," they basically lose a turn. But each time a trick-or-treater can draw a candy card, it may give them an ability to somehow evade, delay or strike back at the monsters lurking in the shadows.

But the monsters must get their turn before the trick-or-treater can reveal the token, so they roll the dice for their turn to see if they can attack it before that happens.

Although he played games as a kid and may have made up a few for fun, Davey said he didn't really tune into his inner game nerd until he and his friends discovered Zombies!!! - the exclamation points are part of the name - sometime around his freshman year at Cloquet High School.

"It was the first game that wasn't like Monopoly or Uno: it had more to it," he said. "We got sucked in and with that came making up our own scenarios and cards, adding on to it in our own way. That's really where my love for games started."

Davey and his buddies - including Cameron Lilly, Andrew Frank and Justin Frykman - would throw on the horror movies and immerse themselves in the games they were playing. Today, he said, he wants others to be able to have that same feeling, to give them that game night they used to have.

Later on, when Davey started toying around with his own game ideas, those same friends would test his games. Lilly was able to break most of them.

A game he called "Skirmish" was Davey's first attempt at making a game people would buy, versus just passing the time at less-than-stimulating jobs by making up games about dungeon crawls or monsters. He was play-testing the game and Skirmish was doing pretty well.

Then he had an epiphany moment while sleeping, only not the religious kind.

"Then one day I woke up and all these pieces of those board games I'd been doing had Frankensteined themselves together into "All Hallows' Eve," he said. "Components I had wanted to try and make work for other games or certain mechanics that I had used that didn't quite stand up to other tasks. I wish it didn't sound so corny, but I truly woke up and said 'if I do this and this and set it in a Halloween theme, it's going to work. I could tell from the beginning. And I would say 80 percent of the core of what I did is still present in the game today."

That was four years ago.

In the beginning, Davey made everything for his game as cheaply as he could.

"I would take cardboard and paper, I had little guys and milliput (putty) that I would make little figures out of just to get pieces for people to see and play and beyond," he said.

Then he started working on better cards, more permanent designs. He would get to a certain quality, then take the next step in the evolution of the game when he'd gotten more feedback and had the money for better products and material.

"The thing that truly allowed me to do this was the advent of the resin 3D printers becoming a household thing," he said. "Otherwise, I would have needed a company to back me or to do a Kickstarter and spend hundreds of thousands of dollars and risk a lot of big money."

Instead, he has a 3D printer in his basement workshop - along with his shelves of horror movies and games and extra pieces for All Hallows' Eve - and he gets to produce things in his own home.

"I can make it more like a small business, rather than relying on a big game company," he said, adding that he likes having creative control. "I don't want my game to turn into Friday the 13th with Jason and Michael and Freddy running around."

Of course, he had to learn to run that 3D printer. He had to get confident enough in his own talents to design cards and characters, and to know when to hire an artist to do that. He designed the characters and the tokens and printed those out, except for three monsters he contracted with an artist to create.

Steven Kruger and Andrew Frank came over to help demonstrate All Hallows' Game for this story, and shared their thoughts on the game. Kruger called it a "turn-based tactics game."

"That's usually a video game term, but basically means every turn you have to readdress what your tactics are going to be," said Kruger, a third-grade teacher. "I think that's what I like so much about this game, because that's my favorite type of video game. So this is right up my alley."

Davey described All Hallows' Eve as "dripping with flavor" in game lingo.

"It's very thematic, so the trick-or-treaters who are heroes work together as a team, so if they're by another hero, they power up," he said. "Vampires are hard to kill so he has to reroll if someone gets him. I tried to put as much of the feel in different cards ... what can a blob do? It can suck down and spit out. Then I think, how can I gamify those things?"

Frank suggests that Davey add a token that would make a house giving out raisins or some other dentist-approved item instead of candy.

"That'd be really funny, you should do that," Kruger said, laughing.

Davey has designed his basic game package, but he also has expansion packs. For a price, people can buy more monsters, trick-or-treaters and gameboard pieces to expand the All Hallows' Eve world.

After years of preparation, Davey now has 30 games ready to sell. The cost for the game only is $55, and a game package - which allows players to expand the board and the characters - is $75. 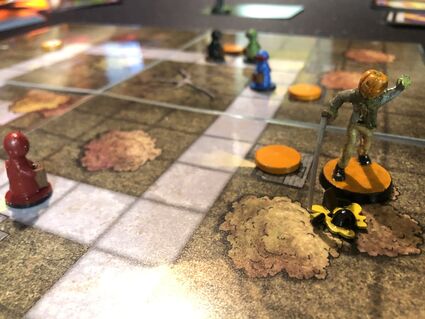 Darrell Davey's favorite monster is Mischief, a pumpkin-headed monster that carries what looks like a tiny scythe. He's been dressing up as Mischief for years on Halloween.

Last month, Davey debuted his game in Cloquet at the West End Flourish event, setting up shop in the old Robert's building, future home to Rise of the Podcast and other media creators. Last weekend, Davey took his game table to Zeitgeist Arts in Duluth, for the Twin Ports Horror Society's Art and Hobby Bazaar.

Next weekend, Oct. 22-24, you can find him at DuluCon, in the Miller Hill Mall. Described by organizers as "the Twin Ports Nerd Convention," DuluCon will feature vendors, oddities, panels and speakers, gaming, a virtual reality station, cosplayer gala and contest and a stage show. Davey, who is also a member of Twin Ports Horror Society and Cloquet's CAT-7 TV programmer, will be part of a panel on board game design and marketing.

Davey likens his fledgling game business to a craft brewery. "It's smaller batches; I get one-on-one stuff with my customers; it's more local," he said.