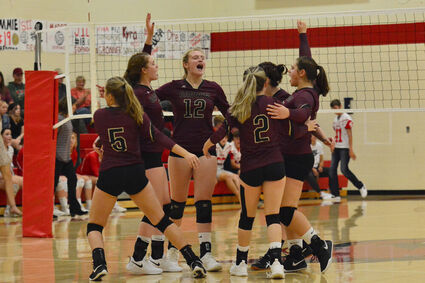 The Barnum volleyball team celebrates a point against Cromwell-Wright last Thursday in Barnum. After the win, the team went 3-1 at an Iron Range tournament Saturday and sports a 16-3 record.

Last Thursday, the Barnum volleyball team swept Cromwell-Wright and then had a successful Saturday at the Mesabi East Tournament, going 3-1 on the day.

"Right now our team is meshing well together," said Barnum coach Corina Newman. "The girls are playing pretty well together, but we have had to overcome an injury, so that is something we are still working out."

The Bombers lost sophomore middle hitter Ivy Polecheck to injury. "Ivy rolled her ankle and we've been trying to find someone to fill the front row and be as solid as her in the blocking game," Newman said. "I think that injury set us back a bit."

Cromwell-Wright has also been fighting injuries. The Cards lost one of their only two seniors, Andrea Pocernich, to a shoulder injury, which has caused the team to lose its all-around top player.

"We are such a young team that losing someone like Andrea is so tough," said Cards coach Amy Granholm. "Andrea is still supporting the team from the bench and is so helpful in keeping the kids upbeat, but that is really something that is tough to overcome."

It is not known how long Pocernich will be out, but the youthful Cards continue to battle with the help of senior libero Scarlett Korpela and junior hitter Sascha Korpela.

"Our philosophy is to have fun and still try and compete," Granholm said. "This team has such amazing chemistry and they love to support each other. It would be more difficult with such a young team if they did not get along, but they really are so supportive of each other that it is amazing." 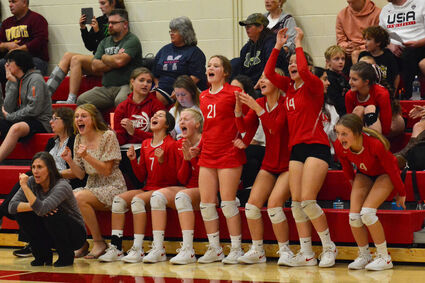 The Cromwell-Wright bench celebrates a point against Barnum last week. Those cheering on the team include senior star Andrea Pocernich, far left, in dress, who is out with a shoulder injury.

After dispatching Cromwell-Wright 25-19, 25-13 and 25-15 Thursday, the Bombers entered the tournament at Mesabi East as one of the favorites and won three of the four games they played. They won 2-0 over North Woods, Wrenshall and Ely and lost 2-0 to a surging Mesabi East team. Leading the hitting charge for the Bombers were Lacy O'Leary and Reese Miletich, while the back row play of Kayelea Poirier, Mendota Castonguay and Lily Higgins helped supplement the great play of setter Brooke Doran, who runs the Barnum offense.

"Barnum is just a strong overall unit and team," coach Granholm said. "We struggled against their hitters and they just had too much for us to handle as well as their service game which gave us problems."

The loss dropped the Cards to 9-11 on the season. Thursday's win, along with the strong weekend, improved the Bombers to 16-3.