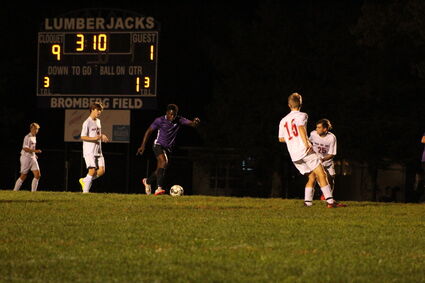 The Cloquet-Esko-Carlton boys kicked off their 7AA post-season play Tuesday, entering the game against Mesabi East as favorites and for good reason, winning 9-1.

The first-half action started quickly as CEC's Elijah Aultman put one away 8 minutes in.

Things really opened up for the No. 3 seeded Lumberjacks, with Elijah Aultman netting two more goals for a hat trick, along with one each from Sam Bailey, Ryan Tomsche and Brody Dushkin before the end of the first half.

An active Lumberjacks student-section created a much-missed atmosphere in the first 40 minutes at Bromberg field, spurring on the 'Jacks in very enthusiastic fashion.

The second half entailed less scoring, but CEC's grip did not loosen. Xavier Anderson found the net twice and in quick succession, in the 56th minute and again in the 58th. Sophomore superstar Elijah Aultman bagged his fourth goal - and the last of the game - in the 59th minute.

"We were very aware that this team just needed one goal against us too, so it's nice that we got out of here and can move on to Thursday."

The next step for CEC is a 5 p.m. Thursday playoff game at Grand Rapids, a team they lost to 2-1 earlier this season.

Looking back on CEC's regular season against Grand Rapids, Sundquist thinks they played a great game, but missed chances proved to be costly.

"Looking back on that tape ... we handled them really well. We had the majority of the chances, I think 12 to 14 real good chances, they had two and they buried them ... A couple of those goals fall and then it goes our way. You know, I'd rather have them fall in the playoffs than in the regular season. But they're a really good team, they've got a really good coach so they'll be tough." 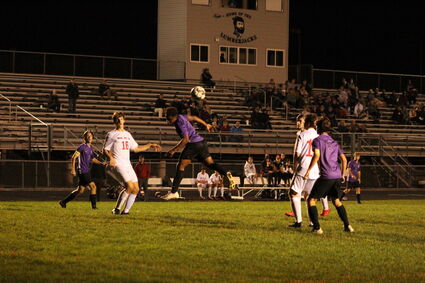 He also trusts his team have found their place and are prepared for their next challenge.

"We moved some pieces around and I feel like everybody's in their best spot right now and I think we're playing well," he said. "We worked out some of the kinks the last three, four games ... we'll just see you know, Rapids will be the big test."

It's all or nothing for CEC, and the team looks ready for the face-off against Grand Rapids. Only time will tell for Sundquist's squad.

If the Lumberjacks win on Thursday (after this issue was printed), they will head into the 7AA championship game Tuesday, Oct. 19 at the high seed. Top-seeded Denfeld was set to play Hermantown at Public Schools stadium Thursday.