Rebels steamroll on both sides 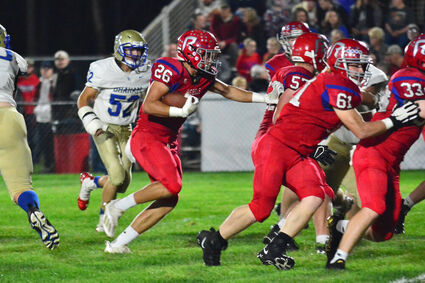 During his 23 years as head coach of the Moose Lake/Willow River football team, Dave Louzek has looked to a strong defense - and an equally strong running game - as the recipe for success. On Friday night, the Rebels put that formula on display in a 49-0 rout of Braham. It was Louzek's 200th career coaching win..

"We've had some great games with Braham during the years, but they are a little down this year," Louzek said. "We knew we needed to focus on our brand of football and to just worry about getting better this week, and that's what the guys did."

Louzek is now tied with longtime coach Bob Youso for most wins in school history. He is among only a handful of active Minnesota coaches in the 200-win category.

"It's amazing to me, but it takes a community of players, coaches, parents and the community support to make that happen," Louzek said. "With the kind of support we've had through the years, it makes it a lot of fun to coach these kids."

The Rebels rolled to 367 yards rushing in posting their fourth shutout in a row on defense.

"We are playing my favorite kind of football," Louzek said. "We are playing Rebel football which is run-heavy and back to old-school double wing and controlling the line of scrimmage."

The ML/WR line is overpowering on offense and defense, which makes it easy for the offense to put up big numbers.

"I really saw it during the first game of the year against Hermantown," Louzek said. "Our line was burying kids on the ground and just physically overpowering them. That's Rebel football."

The recipients of the strong line play are the running backs on offense and the linebackers on defense. On Friday, Jackson Thompson ran for 127 yards and two touchdowns on just five carries. Logan Orvedahl also had two touchdowns and 85 rushing yards on just four carries.

On defense, the Rebels linebackers have been hammering opposing backs.

"Our defense is predicated on our linemen engaging the offensive lineman and letting our linebackers roam and make the plays," Louzek said. "The linebackers we have are strong, fast, athletic, and love to get after it physically." 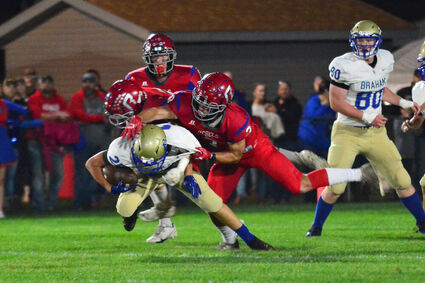 Before halftime the Rebels made it 42-0 with three more scores: a 52-yard punt return by Landin Kurhajetz, a 56-yard run by Henry Ribich and an 85-yard scamper from Jackson Thompson. Thompson also added a 29-yard touchdown run in the third quarter making it 49-0.

"Jackson is one of the strongest and fastest players on our team," Louzek said. "He's tough to bring down and there are times I've seen three or four guys on him and he still keeps his legs pumping. And he's got speed too."

So far this season the Rebels have outscored their opponents 232-21, an average of 46.4 points per game versus 4.

"We are kind of proof that you can run an old-school offense and still have the ability to strike quickly," Louzek said. "We just need to continue to play our brand of football and worry about getting better each game."

The Rebels were scheduled to play at home Thursday against Hinckley-Finlayson in an effort to improve their record to 6-0.