Old game for a new generation 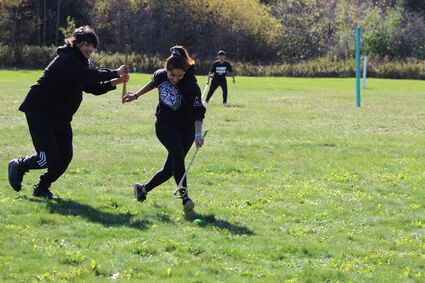 Five-year-old Corleone Ross gets a few tips for scooping up the ball with a handmade lacrosse stick from Tom Howes, Fond du Lac's only stick maker and an advocate for teaching people the more traditional Great Lakes style of lacrosse.

The field across the street from Holy Family Church on the Fond du Lac Reservation was busy Saturday, filled with modern people practicing a very old game in the same place their ancestors played possibly hundreds of years ago.

They were playing Baaga'adowewin, or Great Lakes style lacrosse, a game played by Ojibwe, Dakota and other regional tribes long ago. It's similar but different from the kind of lacrosse made popular in East Coast prep schools or modern athletic leagues.

"All tribes have different versions of a stickball game," said Tom Howes, the self-described "instigator" of Saturday's community lacrosse event. "The Iroquois and the Cherokee games hung on to their games more, the Ojibwe not so much."

The historic connection didn't stop with the game itself on Saturday. Although a baseball backstop at one end of the field belies the ancient history of the grassy field, the group was playing the traditional game on ground that was a historic lacrosse field. Proof of that comes from a map in the "Where the Water Stops" Fond du Lac history book by Sister Bernard Coleman. The same map shows an Indian village or camp that existed nearby during the original U.S. Government Survey made between 1868 and 1870.

Now the Great Lakes style of lacrosse is making a comeback in Minnesota and Wisconsin, and on the Fond du Lac reservation as well.

Fond du Lac elder Wendy Savage was there Saturday, and so were 5-year-old Corleone Ross, teenagers Kalaya Diver and Joseph Shelafoe, and dozens of others aged 2 to 80, all of them game to learn about the sport the Creator gave them in the far distant past.

Savage said she first got interested in lacrosse 20 years ago in New York.

"I knew it was a Native game, given to us by the Creator to stop war," she said.

Savage mostly came to watch Saturday. "It's so exciting to reclaim this field and see our youth picking up this game."

She watched as Howes worked with Ross, showing him different techniques to scoop the tennis ball up into the basket of the lacrosse stick.

Howes was fondly referred to as "the lacrosse stick chief" by at least one friend on Saturday, fellow stick maker Joseph Gokee from the Bad River Tribe.

That's because Howes is probably the only person on the Fond du Lac Reservation currently making the wood and leather Great Lakes style lacrosse sticks by hand.

Howes figured he's made hundreds of lacrosse sticks over the past two years, a skill he learned by talking to stick makers and lacrosse players, digging into history books, looking at old sticks, and trial and error. He also watched online videos and talked to Jon Hunter, who heads a Twin Cities lacrosse group. Hunter was there Saturday, along with a crew of folks from the Twin Cities area.

Howes makes his sticks from black or green ash trees. He selects a tree with a section that is about 5 feet long with no knots, starting at about 6 inches around. He splits the tree in half, then quarters, then eighths. Then he peels the bark, and uses a 4-foot long level to trace a pattern on the wood. "I use a hatchet to remove all the wood that's not inside those lines and I have a nice straight stick," he said.

He then makes a rough handle at one end and carves down the wood at the other end until it's between one-eighth and one-fourth inch thick, throws the wood into an electric steamer for an hour or so until the wood is 'bendy" and then wraps the thin end around a form and clamps it for a day until it cures and dries out.

"I like making things, and it also allows me to channel my thoughts," he said. "I like to have good energy toward those that will use that stick."

Bryan "Bear" Bosto was there Saturday, too. Bosto is also a lacrosse activist of sorts, and formed a partnership with Minnesota's former professional box lacrosse team, the Swarm, more than 10 years ago. Together they brought a lacrosse camp that taught the modern game to Fond du Lac teenagers, at the same time also teaching things such as a healthy diet and exercise.

"I'm here today to support Tom, and help with stick skills," Bosto said, adding that "today was for anyone willing to pick up a stick."

Like Bosto, Howes is thinking of a bigger picture than just teaching people another sport. He's teaching them "their" sport, something he hopes will help them carve a path through life.

"Because life is challenging in all kinds of ways, physical, social, emotional. This (lacrosse) is one of those things given to us, the Ojibwe people, for our wellness," said Howes.

He talked about the things indigenous people have lost: language, context, land, lifestyles and games. "We need healthy activities, things that are culturally based, to inspire people to a healthier lifestyle," he said. "That's what's happening now. The game is in recovery, a revitalization phase." 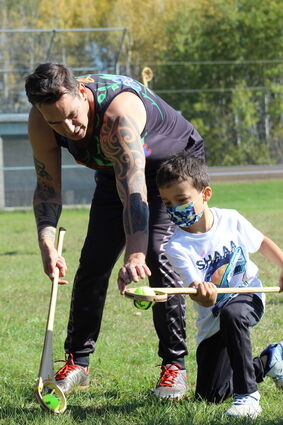 Players of all ages and sizes could grab a stick and a tennis ball and practice the art of scooping, catching and throwing lacrosse balls Saturday during a community lacrosse event.

After the training, organizers and supporters held a giveaway of lacrosse sticks and yoga mats, ate lunch and played a few games. There was an all-ages game, with players aged from 67 years old down to Howes' 5-year-old daughter. Then there was a 12-and-under game, then a break. Then they played a more competitive "wager game," Howes said, in which each player brings something, and teams form based on what items they're hoping to win from the other team. Whatever team loses, loses all their stuff. Howes encouraged them to share their winnings.

"It was beautiful," said Howes. "That's something I've wanted to do for a very long time."

Howes is hoping Saturday's event was just the first of many.

"When I grew up, I didn't know what lacrosse was, especially not the Ojibwe traditional style," he said. "When these kids grow up, I want them to tell people: 'This is an Ojibwe game.'"

Check out a video of Tom Howes talking about lacrosse with Native Report here: