Police promotions in the spotlight 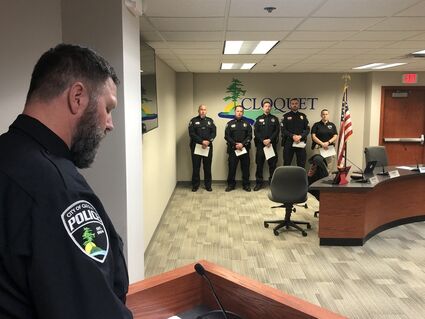 Cloquet City Council chambers were packed Tuesday, not with irate citizens, but with proud parents, spouses and children.

In a followup to the oath of office for officers hired during the pandemic given during the Oct. 5 meeting, officers who were promoted over the past 18 months had their moment in the sun on Tuesday.

The administration at the department has seen a large amount of turnover over the past two years, from the chief at the top to at least two of the sergeants. Judge Robert Macaulay administered a leadership oath to the group after addressing the crowd.

"I very much appreciate living in this community under the watchful eye of this outstanding group of professionals," Macaulay said. "You can be very, very proud of your family member or friend that is standing there - they very much deserve to be there."

Police chief Derek Randall introduced the command staff who were promoted or hired one at a time, including:

• Detective Kristina Sather: Promoted to detective in July 2020, Sather has been with the CPD for seven years. She specializes in cellphone forensics and general investigations, is a field training officer and also advises the Police Explorer group, for people interested in becoming police officers. She has a bachelor's degree in criminal justice.

• Sgt. Zack Sandstrom: Promoted to sergeant in July 2021, Sandstrom has been with the CPD three years. He has been a member of the county's Consolidated Emergency Response Team (CERT) and a field training officer. "Sandstrom is spoken of highly among his peers as an informal leader, highly self-motivated, knowledgeable in statutes and procedures, and willing to go the extra mile for himself, his coworkers, and his community," Randall said. Sandstrom has a bachelor's degree in criminology and law enforcement degree.

• Sgt. Nate Cook: Promoted to sergeant in July 2021, Cook has been with the CPD more than six years. He has been a CERT member, a field training officer, a union steward and a shift supervisor. "His peers know Cook as someone with a keen sense of humility and compassion and someone who cares deeply for his fellow officers and the public he serves," Randall said. Cook has a bachelor's degree in criminology and a law enforcement degree.

• Commander Dave O'Connor: Hired in August 2020, O'Connor was hired from outside the CPD to serve as patrol commander, where he assists with the day-to-day operations of the department and interfaces daily with patrol staff. "In coming from the outside, he has brought ideas, experiences and perspectives that have helped our organization as we have worked to rebrand how we serve our community," Randall said. O'Connor is a Duluth native who started his career in law enforcement with the Minneapolis PD, ultimately rising to sergeant. O'Connor comes from a family of public servants, Randall said. O'Connor has a law enforcement degree, a bachelor's degree in finance and a master's degree in public safety leadership.

• Commander Adam Reed: Promoted in July 2020, Reed has been with the CPD since 2004. He has been a police officer, detective, patrol sergeant and interim commander. He has been a member of the Carlton County dive/rescue team, the Carlton County drone team, a CERT member and he is a field training officer and the department's firearms instructor and weapons armorer. Before the CPD, Reed worked for the Department of Corrections. He has a bachelor's degree in sociology with an emphasis in criminal justice.

• Chief Derek Randall: Promoted in June 2020, Randall joined the CPD in 2001. He worked his way from patrol officer to detective, when he also became the city's first certified school resource officer and handled juvenile investigations. In 2006, he began specialized training in computer and cellphone forensics, giving him expertise to help other departments and serve on the state's Internet Crimes Against Children task force. He became commander of operations and investigations in 2015, then interim police chief in September 2019 before taking the job permanently last year. He has a bachelor's degree in criminal justice and a master's degree in public safety executive leadership. He is a graduate of the leadership in police organization program from the International Association of Chiefs of Police and the Executive and Command Leadership Institutes from the FBI Law Enforcement Executive Development Association. He also has worked with drug court, the county's drug coalition, restorative justice and is a board member for the FDLTCC law enforcement program.

Peterson then went off script in praise of the chief.

"Your caring nature for the community and its citizens is inspiring; your appreciation and dedication to the officers and staff within your department is wonderful; your willingness to review, tweak, change and fight for the policies of your department is neverending," he said. 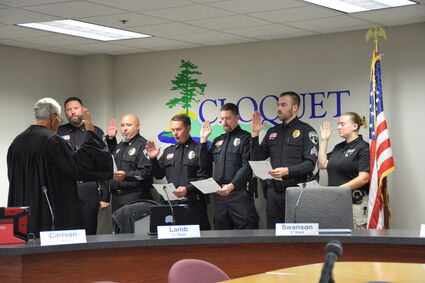 Judge Robert Macaulay administers the leadership oath of office to everyone at the Cloquet police department that was promoted since the pandemic began.

Also Tuesday, the council delayed any kind of vote on the city's project labor agreement until the Nov. 2 meeting, authorized several budgeted public works department purchases, and appointed Pete Hughes to street department supervisor. Hughes has worked for the city for nearly 20 years and was the unanimous choice of the selection committee, public works director Caleb Peterson said.

Finally, councilors gave its approval for staff to draw up a purchase agreement with Upper Lakes Foods that would provide the company with a 0.91-acre lot adjacent to the ULF property that is owned by the city, but vacant. ULF would like to use the lot for additional truck and trailer parking, after launching an over-the-road transportation company during the pandemic. The planning commission must vote on whether the use is consistent with the Comprehensive Plan at its Nov. 9 meeting before any further action can be taken.