Girls get another - with state in the offing 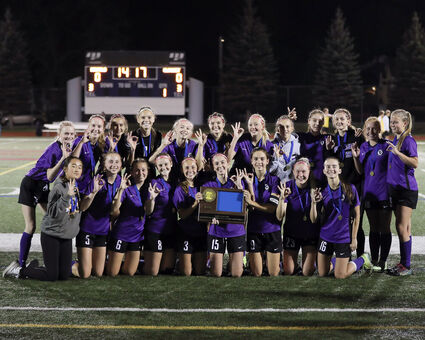 When the Lumberjacks won their second straight Section 7A title a year ago, it was bittersweet. Thanks to Covid-19 guidelines, there was no state tournament, so the victory left the Cloquet players with that taste of not finishing something they had started.

With the Minnesota State High School League adding another class to soccer this season, the Lumberjacks took that challenge to heart. With hard work and determination, the Cloquet girls soccer team shut out North Branch 3-0 Tuesday night at Public Schools Stadium to win the Section 7AA crown again and advance to their ninth state soccer tournament next week.

Senior co-captain Katie Turner said it's unheard of to win the section three years in a row, a statement that is certainly true for the Lumberjacks.

"I am so blessed to have accomplished this with such an amazing team," she said. "It's a feeling I hope to never forget."

The Lumberjacks scored first when junior Alexa Snesrud put the ball past net minder Sharis Garcia-Velazquez at the 30-minute mark to give the Lumberjacks a 1-0 lead.

"We came out a little nervous," head coach Dustin Randall said. "Once we got that first goal the girls really settled down."

The Lumberjacks controlled most of the play in the first half, pressuring the Vikings with every opportunity and shutting down Ava Gerten, one of the top scorers in the state.

The first half ended with the Lumberjacks holding a 1-0 lead. If not for some outstanding saves made by the North Branch goalkeeper, Cloquet would have had a bigger lead at the break.

Cloquet senior defender Olivia Macaulay scored her first goal of the season midway through the second half when a blocked shot came back to her and she sent a shot over the outstretched hand of Garcia-Velazquez to make it 2-0. 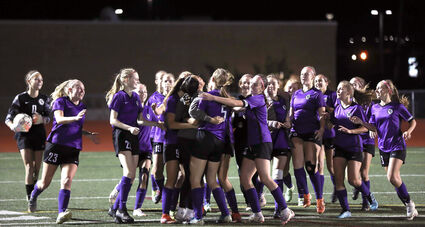 The Lumberjacks girls soccer team celebrates a third-straight section title Tuesday in Duluth after a 3-0 win over North Branch.

The Lumberjacks sealed the contest with just under four minutes remaining in the second half when senior defender Olivia Jameson scored her second goal of the season on a free kick that flew over the goalkeeper's extended hand and into the back of the net.

Turner credits the Lumberjacks' "team first" philosophy for their post-season success the past three years.

With the victory, the Lumberjacks improved to 16-2 on the season and advance to the state tournament next week. The soccer tournament begins with quarterfinal action on Tuesday, Wednesday, and Thursday of next week. Times and location will be determined after the seedings are established for the tournament.