Race is on leading to sections 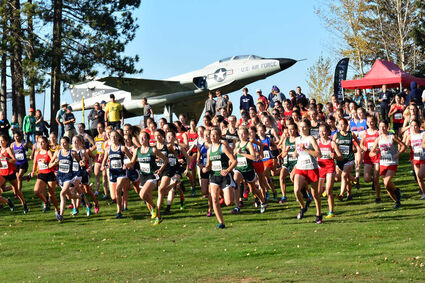 The girls Varsity 5K kicks off in Proctor Tuesday afternoon.

The end of the high school cross country season is on the horizon. On Tuesday night all six local teams participated in the Proctor Lions cross country meet in an effort to show how far they've come as they get ready for the sectionals.

The Raptors girls team captured top honors for Class A in Proctor as they continue to prove they will be a force this season. South Ridge finished second, Moose Lake/Willow River/Barnum was third, Marshall finished fourth, MIB was fifth, Esko took sixth and Hill City was seventh.

As he has done all year, Cromwell-Wright's Noah Foster took top honors in Proctor's Class A boys race with a time of 16:47.1. Foster was followed by MIB's Jeff Kayfes in second and Carlton/Wrenshall's Jack Riley in third. Alex Burckhardt of South Ridge was fourth, followed by a pair of Moose Lake/Willow River runners, Joseph Mikrot and Shawn Bailey, who placed fifth and sixth, respectively.

"I know our kids are just so excited to be out running against other kids again this season," said Cromwell-Wright coach Pete Koenig. "We are a very small team, but we have a lot of fun, especially cheering for each other."

The one runner the Cards have cheered on is Foster. Foster lost in the Chub Lake scrimmage run to Cloquet's Miles Fisher and has not lost since to any Minnesota runner. He finished second recently in the Milaca Mega Meet, but that was to a runner from South Dakota. Currently Foster is ranked No. 3 in the Minnesota coaches poll in Class A.

"Noah is just amazing and has put in the work and has a great foundation," said Koenig. "He is just a warrior. Right now he is healthy, powerful and strong, and that is a great combination."

Due to low numbers, the Cards have not been able to field a complete team in races on the boys or girls side this season. Koenig likes the improvement he is seeing.

Over in Cloquet, the Lumberjacks have had a solid season on both the boys and girls sides as they also are seeing continued improvement.

"They all have improved a lot over the season," said Cloquet coach Chandra Allen. "We posted some big PRs (personal records) at the conference meet."

In Proctor Tuesday, the Lumberjacks got an impressive first-place win in Class AA by Miles Fischer, who finished in 16:57.6; Josh Knight of Proctor was second, followed by Cloquet's Jake Mertz in third. Cloquet's Sam Buytaert also had a strong day, finishing fifth.

"Miles Fischer has been our top runner throughout the season, while Jake Mertz and Sam Buytaert have been Number 2 and 2," coach Allen said. "Jake had a win at the Duluth East meet on Oct. 9. On the girls side, Elise Cawcutt has been our No. 1 girl. Bri LaCore and Char Ripp have consistently been alternating between Number 2 and 3."

Allen said on Monday she has nine boys who have the potential to run in the sectional meet, but she wanted to wait until after Tuesday's meet in Proctor to make the decision on the girls who will run at sections. A big plus for the girls will be the return of Amelia Allen, who had a stress fracture in her shin earlier in the season. She was finally given clearance to run in just recently.

Overall, the season has gone well for Esko's boys and girls cross country teams. The boys came out on top at the Polar League conference meet last week and have finished near the top at all the meets they have participated in this season.

"Jack McWilliams, Michael Cornell, Nate Rengo and Ben Meysembourg have been our top boys runners all season and have often finished in the top 10 at most meets," said Esko coach Jerimy Hallsten. "The time and commitment they put in during the summer has allowed them to run at a higher level and run with confidence. I'm looking forward to seeing how they and the rest of the Esko boys section team perform next Thursday at the Cloquet Country Club, with hopes of continuing the success they have had so far this season."

The Eskomo girls team has also had a strong season, but they had to deal with the injury and illness bug, which has slowed their progress just a wee bit.

"We've had a few runners that have been dealing with minor injuries and illnesses, but overall, they have improved over the course of the season," said Hallsten. "Grace Hrabik has been our top girls runner throughout and is set to have a great performance next Thursday. A welcomed unexpected runner who has made some noise in the second half of the season is seventh-grade runner Aubrey Pearce. She has quickly established herself on our varsity girls team and should help at the section meet."

Moose Lake/Willow River/Barnum head coach Adam Whelan is also excited about how the season has played out for his squad.

"The season has gone quite well so far," said Whelan. "It is definitely nice to have a more normal-feeling season compared to what we had last year. The kids have also competed well and both of our teams are placing pretty well in meets."

The Rebels boys team is led by Joseph Mikrot and Shawn Bailey.

"Both Mikrot and Bailey earned all-conference honors at the Polar League conference championships," Whelan said. "On the girls side, Amelia Olson and Brooklyn Wasche are my top two, with Amelia earning all-conference."

Whelan has seen his runners time improving throughout the season, especially on the boys side.

"I'm hoping our teams compete well at sections," said Whelan. "I think both teams can place in the top five of the section if they run what they're capable of."

Over at South Ridge High School, longtime coach Jeremy Polson feels his boys team is the best team he has ever coached, and his girls team is improving as well.

Interestingly, a set of twins is leading the Panthers' teams.

Addison Burckhardt was the top local finisher in Proctor in the Class A girls race on Tuesday, finishing in third place behind the Nelson sisters from MIB, who were first and second. The Panthers also got an impressive fifth-place finish from sophomore Evelyn Brodeen.

The Burckhardt twins are just freshmen, so they will be around a long time to lead the Panthers squad.

"Tyler Morse, Sawyer FierkeLepp, and Quinn FierkeLepp have really stepped up and have become solid varsity runners with a bright future ahead for our boys team. Our top 3 boys are all freshmen," said Polson. "Evelyn Brodeen has really been a dominant runner for us on the girls team. She has been as close as 13 seconds behind our top girl."

Quinn FierkeLepp has made the biggest jump for the Panthers this season, as he transitioned from junior varsity to being the fourth runner now on varsity.

"Our goal is to improve each race and be ready for a strong performance at sections," said Polson.

The Carlton/Wrenshall Raptors continue to make strides and gain confidence in advance of the section meet in Cloquet next week.

"We started this year with many new and young faces," said Raptors coach Erik Holter. "Of the 25 student athletes we have on the current roster, 10 are brand new to the sport. Although the team is made up of many just trying it out for the first time, we've had plenty of success that's come from both raw talent and hard work."

The good news for the Raptors is their hard work is now starting to pay off.

"Many of our runners have continued to improve as the season has progressed, with most hitting personal bests in race times and peaking at the right moments," Holter said. "The girls varsity team has been a real threat this year, earning several placements in the top three at meets."

At the Polar League Conference Championships, the Raptors girls team took third place overall, but were without one of their top runners.

"Brielle Simula, a seventh-grader from Carlton, is a first-time runner who has quickly blossomed into a top runner for us," said Holter. Simula placed sixth in the Class A race in Proctor Tuesday.

He said the girls team should be a favorite to take first or second at sections, which would earn them a berth at the state meet. 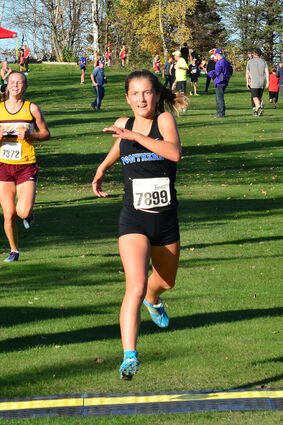 Addison Burckhardt from South Ridge finishes the girls varsity 5K in third place with a time of 20:25.6 Tuesday afternoon in Proctor.

As for the boys, they have a split between returning veteran runners and a couple of runners who are younger - eighth- and ninth-graders - who are experiencing their first year in the sport.

"Although they lack experience, they possess a great deal of raw talent and hard-working mentalities that have allowed them to find themselves earning spots on the boys varsity team," said Holter.

He pointed to Jack Riley as one of the boys who has a good chance to go to state.

"Riley has placed himself among the elite runners this year through the work he's put in during the season, but more importantly, the off season leading up to it," Holder said. "Time will tell for how this team will end up in the rankings, but I have nothing but faith in their abilities, work ethic, and mental toughness, which will get them far, both on and off the course."