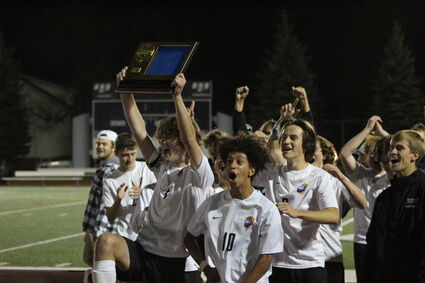 Winning was sweet revenge for No. 3 seed Cloquet-Esko-Carlton because Denfeld had knocked last year's undefeated 'Jacks team out during the Section 7A quarterfinals after Cloquet had beaten them 11-0 a month before.

"I'm really proud of the boys and all the effort it took to get us this far," head coach John Sundquist said. "The schedule this year was one of the toughest Cloquet had ever played and I think that's what helped us the most last night.

"A lot of the teams we played during the season have won their section finals and are going to the state tournament," Sundquist added, "and it made it even sweeter to [avenge] last year's loss against Denfeld."

The last two meetings between these two teams - earlier this season and last year's section game - saw hardfought tight battles in which the Hunters prevailed 1-0 in both matches. Tuesday night's section final was very physical.

Each team scored twice in the first half of the section final. Junior Jordan Aultman hit a high shot into the net for the game's first goal just a little over three minutes in. The Hunters responded less than two minutes later, tying the score at 1-1 when August Haugen scored past a diving Lucas Rauner.

In a match which saw Cloquet playing aggressively and Denfeld relying on the counterattack, it was the Lumberjacks who picked up the third goal of the match when sophomore Elijah Aultman used a header pass to himself to make it 2-1 just 10 minutes in.

Denfeld's Matt Eklund tied the match at 2-2 at the 19-minute mark, a goal that was initially disallowed by the center referee but allowed after the assistant ref controversially disputed the call. Both teams had other opportunities to score, but were denied and the first half ended 2-2.

The hard-nosed play continued into the second half when Jordan Aultman broke the 2-2 tie with his second goal of the game, which cemented the Lumberjacks' final 3-2 victory.

Jordan Aultman - who moved to Carlton County with his brother in 2019 from Sierra Leone - said it was amazing to beat Denfeld. "When I scored the last goal I hoped we were going to state," he said. "I can't wait for us to win state, too."

Several yellow cards and a red card were handed out down the stretch as both teams got increasingly physical. With a little over a minute remaining, a hard collision between CEC goalie Rauner and Denfeld's Simon Davidson led to a red card ejection on a play away from the collision. A yellow card handed out to the Hunter bench didn't help their cause. The Lumberjacks went on to the victory, making it a Section 7AA sweep for both the girls and boys soccer teams at PSS.

"Having to go play the No. 1 seed on their turf is never easy," Bailey said. "Both teams fought hard and it was a well-deserved win for us. I couldn't be happier with this team. It's a dream come true."

The CEC boys now advance to the state tournament for the second time in the team's history. The last appearance was back in 2011.

As with the girls state soccer tournament, the quarterfinal dates and locations will be determined after the state seeding's come out this weekend.

CEC had to knock off the top two 7AA teams to get to state. Last Thursday, they went head to head in the section semifinal against No. 2 seed Grand Rapids, a team the Lumberjacks lost to last month. With the season on the line, the 'Jacks completed a 2-0 upset over the Thunderhawks.

It was a huge step in the Lumberjacks redemption tour.

"To actually come back and win it for the last few seniors, it just makes me so happy." 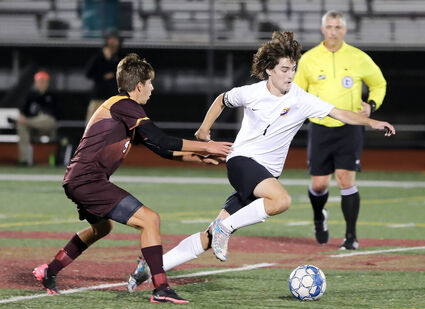 Cloquet-Esko-Carlton's Ryan Tomsche draws a foul on Duluth Denfeld's Augustin Haugen during Tuesday's Section 7AA soccer championship at Public Schools Stadium. The Lumberjacks were dropped by the Hunters in 2020 section play, so CEC's 3-2 win was some payback.

CEC dominated the first half of the Grand Rapids game, having the majority of possession and chances. Elijah Aultman was the first to capitalize for CEC, with a goal in the 18th minute. The speed of play from the Lumberjacks was as good as it's been all season.

The second half was a much closer contest. Grand Rapids had a few good chances, but CEC goalie Lucas Rauner put in a clutch performance. With the half nearing an end, senior Xavier Anderson found the scoresheet in the 72nd minute and put his team up 2-0 - smothering the hopes of the Thunderhawks.

Anderson described the feeling of scoring a goal to seal a section final spot for his team:

"Beautiful, there's no words for it ... I don't even really know what to say right now, I have so much energy."

Fellow senior and co-captain Carson Essler was extremely confident after the win, knowing they would play in the final against Denfeld Tuesday.

"It's just gonna be the best feeling ever when we just destroy them," he said.