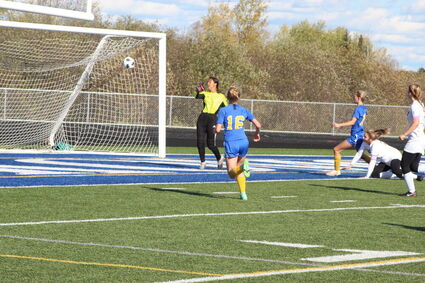 The top-seeded Esko girls soccer team shut out Two Harbors 2-0 in the Section 7A quarterfinals last Wednesday, but came up short in the semifinal game Saturday. The Eskomos fell to No. 4 seed Legacy Christian Academy in a penalty kick shootout after a 0-0 game with neither side scoring in the 20-minute overtime.

“Our game on Saturday was one of those games that haunts the players and the coaches,” said Esko girls soccer coach Caitlin Lilly. “We showed up a little lackluster and by the time we were rolling it was just a little too late.”

Lilly praised Legacy goalie, Kaisa Niska, for stopping a barrage of shots from her players. “The Legacy Christian Academy goalie had a fantastic game and blocked over 30 Esko shots,” Lilly said.

Esko goaltender Orie Randall only recorded one save during play while the Eskomos kept Niska busy throughout, with more than one near miss in the first half, including a shot by Esko’s Emily Rengo that sailed across the goal to land on the other side while the next Esko shot hit the top post and bounced out.

Esko dominated almost every statistic, with the previously mentioned 30 shots to one by Legacy. Esko also had 19 corner kicks to zero by Legacy and won 50/50 balls 60 percent of the time.

But they lost in the most important category: the penalty shootout. There Esko scored on two out of five attempts, while Legacy scored on three of five. 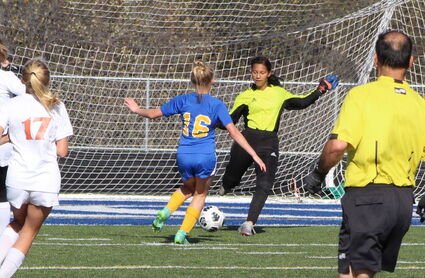 Legacy advanced to the Section 7A championship game Tuesday, losing 1-0 to Proctor, a team Esko defeated 3-0 on Sept. 18.

Lilly said the team will face a few new teams from Section 7A and also continue to play Cloquet, Hermantown and Grand Rapids, which all moved to Section 7AA this year when soccer went to three classes.

“Even though we’re coming back next season after losing nine seniors, we’re planning to be competitive and redeem this year’s playoff run,” she said.