Homeowners are itching for a fright 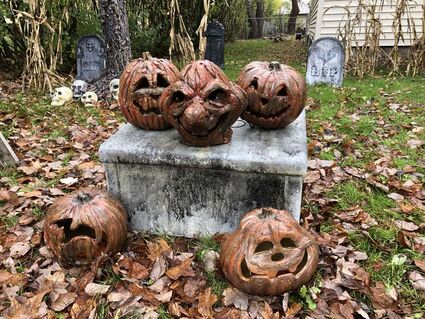 Bil Nicholson is no newcomer to the art of the scare.

As a middle school student, he built himself a coffin out of plywood, dressed up as Dracula - or his interpretation of the blood-sucking vampire - and laid out on the front porch of his house, ready to scare the bejesus out of anyone who dared to trick-or-treat there.

He's upped his game since then. Now he creates an entire Halloween world in the front yard and porch of their home at 330 Fourth St. in Cloquet. Each year the house is suddenly surrounded by a faux iron fence and tombstones fill the lawn. A bat hangs over the front walk while a hunched-over butler holds a lamp over the grave of Lucy Lastic, who "bungied badly."

A skeleton swings nearby and Eleanor the ghost is rattling in the front window, black lit to show up after dark.

Come Halloween night, lightning will flash and the sounds of thunder will rumble through the air as a fog slowly creeps across the ghoulish scene.

Sure, ring the doorbell if you dare. Take a picture in the photo "boooooth" if you're bold enough.

Nicholson - and numerous other residents around the area - are in their element every October as they prepare for their favorite holiday of the year: Halloween.

A drive around Cloquet reveals a dazzling display at 111 13th St., where lights outline the ghouls and dead things crawling across the lawn. At the corner of Carlton Avenue and Ninth Street, the Schlenvogt family have traded in their July Fourth decorations for caskets and cobwebs and darkly humorous tombstones: "Ben Dismembered, May He Rest in Pieces," says one. "Here Lies the Pillsbury Dough Boy. He Will Rise Again," says another.

For two months every year, Cassie Nicholson says she becomes a Halloween widow. She loses Bil to his Halloween masterpiece.

"It's like the deer hunting widow - only they're a week and she's a month or two," Bil said. He's been at it since early September, he admits.

The Nicholsons have been decorating their home for close to 15 years and adding new pieces or sounds almost every year, drawing children and their parents or grandparents from across the city for candy and fun. The most trick-or-treaters they've ever had is about 460, although the average is closer to 300. 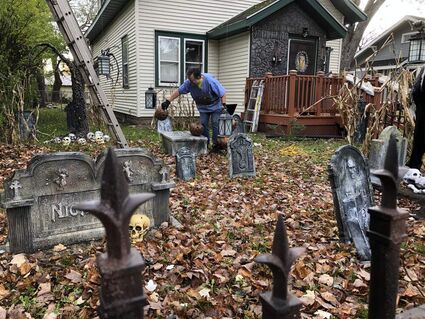 Bil Nicholson works in the front yard of his home at 330 Fourth St. in Cloquet Tuesday morning, placing a quartet of fanciful pumpkins just so and wrapping up construction of a new mausoleum that will house a fog machine on Halloween night. Nicholson is preparing for the big show on Sunday, which should start at his house after 4:30 p.m.

Bil said the Halloween bug is spreading down the street and within his family. He got valuable help this year from Brandon Seguin, a friend of the family, and corn stalks from an uncle.

"The neighbors are getting into it, they've got some inflatables down there," he said. Then he gestured at a house across the street that's decorated. "These guys have a couple kids and they just love it. Occasionally they'll come over and help me. It's turning into a neighborhood deal and it's kind of fun."

The show at the Nicholson house will kick off after 4:30 p.m., so plan accordingly. And they are accepting canned or boxed goods for the Salvation Army food shelf or cash donations for County Seat Theater.

And rest easy about trick-or-treating: it's recommended by the Centers for Disease Control and Prevention. After all, it's outdoors. Just don't gather in large groups and scream ... which means those haunted house visits need to be in small groups only.