Boys state soccer: One and done - but not without a fight 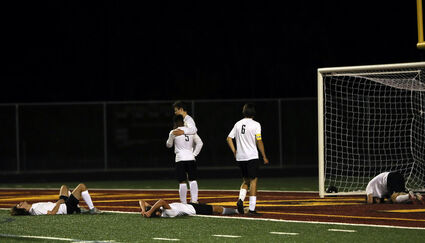 CEC boys soccer players react after a double overtime loss Tuesday in the first round of the state tournament, a 2-1 loss to Mahtomedi at Irondale High School in New Brighton. Photos by Dave Harwig / Pine Knot News

The Cloquet-Esko-Carlton boys soccer season didn't end the way they were hoping, but with the thrilling 2-1 double overtime loss to Mahtomedi, the Lumberjacks showed many why they are one of the best teams in the state and deserved to play in the state tournament.

The Zephyrs and the Lumberjacks were very similarly matched heading into the state quarterfinal matchup at Irondale High School in New Brighton. Each of the two teams entered the tournament averaging a little over three goals per game, while both teams allowed only 0.7 goals against.

In a match that saw both teams feeling each other out in the first half, the Lumberjacks seemed to have an early edge, applying offensive pressure and testing Zephyr goalkeeper Cavanaugh Bruner.

"I was very happy with how the boys played tonight against a very solid team," said CEC head coach John Sundquist. "It seemed pretty even in the first half until they scored late to take the lead, but our kids never quit and fought back and tied the match right before halftime."

Mahtomedi's Yassin Hussein blasted a low line drive from the top of the penalty area and beat CEC goalie Lucas Rauner to give Mahtomedi the 1-0 lead at the 36:54 mark of the first half.

That shot gave the Zephyrs momentum, but CEC didn't stop fighting and after working the ball deep into the Mahtomedi zone, Cloquet senior Spencer Teitelbaum placed the ball perfectly in front of the Zephyrs goal on a corner kick and a header from Jordan Aultman to the short side tied the contest at 1-1 at 38:41 of the first half.

"We made some defensive adjustments," Sundquist said. "Their forwards are very good, but I thought it was the best game we played defensively tonight. It was heartbreaking to see it end like it did."

Cloquet senior forward Ryan Tomsche said he felt like the Lumberjacks handled the pressure well and managed to capitalize on Mahtomedi's mistakes during the quarterfinal game. The senior co-captain said they learned some important lessons from the team's early exit from the playoffs last year.

"We didn't go into playoffs thinking we were going to steamroll everyone," he said. "We played every game like it was our last and that was the key to us getting this far."

Following a scoreless second half, both teams headed into the first overtime with Mahtomedi pushing the action and a couple of point blank saves by Rauner kept the game tied heading into the second overtime.

With a shootout looming if neither team scored in the second overtime, both teams were looking for opportunities to put shots on goal and secure the victory.

The Zephyrs succeeded first. They put the ball out in front of the Lumberjacks goal and with the Lumberjacks trying to clear, a rebound went straight to the Zephyrs Lucas Yee Yick, who scored the game winner at the 92:25 mark from 5 yards out with a powerful shot.

Rauner finished the match with nine saves on the night for the Lumberjacks and Bruner had seven for the Zephyrs. 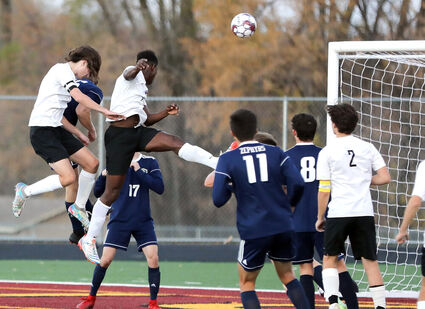 It was a bittersweet ending for the seniors, who finally made it to state and got very close to beating the No. 2 ranked team in Class AA. They will see seven seniors graduate off this year's team.

Esko senior Riley McIlvain credited chemistry and coaching for the 'Jacks success this year. "Almost everyone on the team has known each other for years and we've learned how each other plays and how to build off each other's strengths," he said. "We also had a group of amazing coaches that brought out the best in us and gave us the tools that allowed us to do the things we did."

A grateful Tomsche offered some advice for younger players. "Have fun, cherish the couple months you have with your teammates every year because it really does go by too fast."

CEC ends its season with a final record of 12-5-2 overall.